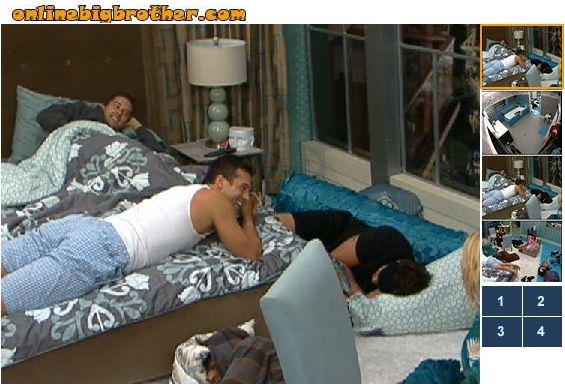 10:15am – 10:50am All the house guests are laying around the HOH room. Brendon is talking to Matt about his job he quit because they mistakenly fired him. Brendon and Matt talk about Scientology. Britney, Matt, Lane, and Brendon talk about bar fights. Britney talks about her ex-boyfriend who got jealous at a bar because she was talking to some other guy. Brendon says that if a guy grabbed his girlfriend’s ass he would go fight him to defend his girlfriends honor. Rachel and Britney both tell Brendon NO! …and laugh saying defending her honor?! They both says that some guy grabbing their ass isn’t something to fight about. Brendon, Matt, and Lane ask Britney a ton of questions about her boyfriend Nick. How tall he is, how much he weighs, what type of clothes he wears. They start making fun of him when she says that he wear golf clothes all the time. Brendon, Matt and Lane all say that they can totally picture what he looks like. Then Rachel asks her if he has facial hair. Britney says that he has a beard like Lanes. All the guys say that they didn’t picture that … They ask him how hairy Nick is, if he has any broken bones. Britney says that he broke his back on the 4th of July jumping into a pool. They ask her what kind of music he listens to and she says Jack Johnson, and John Mayer. All the guys say oh now that’s the Nick I know … that matches the golf tees and sweaters. They all say that the beard still doesn’t match and that they don’t like it. Lane calls him the poser beard guy. Matt asks if they are talking about the same Nick because his Nick doesn’t have a beard. They all say that they want her to win HOH tonight so that they can see the beard. Rachel says that she thinks she has met Nick and that she thinks she dated a guy like Nick. Rachel says that the guy she dated wore three shirts with all three collars popped. Britney says Rachel I think you have the wrong idea about her Nick …he would never do that.

12pm The talk turns to Rachel talking about Vagas. Rachel talks about the people she knows, the places she goes, how much to tip in Vagas…. Rachel says that she gets in trouble all the time in Vagas, but that everyone still loves her …she figures that they love her because she gets in trouble. Matt says that something seriously fucked up is going on with the show tonight, why else would they need over 2 hours to get ready. Matt says that they do this week after week …something is going to happen …something is different. Rachel says what if they aren’t evicting anyone? Matt and Britney say no.. Britney says that they are already setting them up for a double eviction. 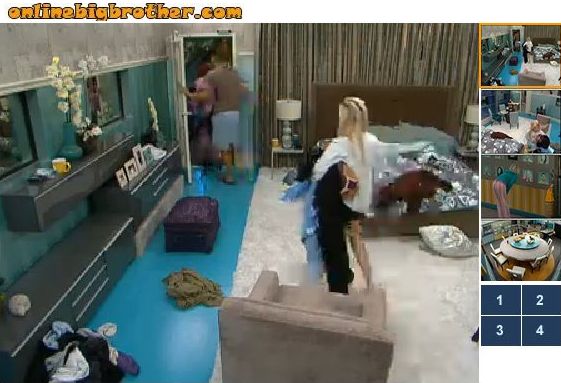 12:13pm Big Brother lets them out of the HOH room.

what is the deal with rach talking about Vagas all the time shut up we get that you love Vagas …….rach “I AM VAGAS”

what’s vagas? is that a female viagra?

So has Pandora’s box been opened? Or will it be opened tonight?

The B/R machine must go now already yo.
Bojangles.
TEAM BRIGADE YO!!!

Tossing grenades left and right YO!!!
TEAM BRIGADE YO!!

Now that is something Lane can probably get into.

I
Reply to  James

Team Brigade all the way Yo!

have you noticed that rachel cannot stand to have the conversation about any other girl but her………….she tried so terribly hard to get the focus off of brit…….very needy girl she is.

just a thought
Reply to  laura

Not just girls, anyone. She needs to be the center of attention. She is definitely very needy and insecure. I wonder if they do psychological testing on houseguests before they pick them to see what people are like and pick as many disfunctional people as possible?

I bet pandoras box has annie in it. Shes back to get rachels man

Did anyone else here join the Big brother fantasy league? I am so frustrated with the running of the league. they don’t add points correctly and they don’t post the point by the deadline they give, they don’t keep up listing the HG’s points on the points board, and today I’m trying to get my picks in and it’s still in blackout mode from last nights show. and what is extra frustrating is I can’t find a way to contact the people that run the league.

what league is this?

ahhh thanks, I’ve never been there before. I just started going to one on another site i’ll post a link here once I get a chance to try it out.

Yes, seriously, And since the league has just under 19,000 players I thought some of them besides myself must post here.

Hope Britney and Lane make it to the final two….so funny! The Brogade does not know how lucky they are to have her doing their dirty work for them….

I found a Britney gif of her dancing during the flip cup game!
http://i27.tinypic.com/33ol1zq.gif

Simon
Reply to  The Excitement

thats a great animated Gif.. there tough to make well done to whoever made that one

The Excitement
Reply to  Simon

yeah, i stumbled upon a couple of sites that have a bunch of devoted Britney Haynes fans. they have cool pictures and gifs of her. why isn’t this site as cool as theirs?? lol :D

Jodie
Reply to  The Excitement

because it’s better!! it’s for all the cast and their fans. Whether you like them or not, you find out the latest and the posts are what keeps us coming back.

Double eviction tonight would be great.

Wouldn’t that shock them all since they aren’t expecting it yet.

julie would have announced a double eviction to america so it wont be this week.

between them i doubt if the brigade could summon up 3 brain cells so i cant wait to see their faces tonight when the dont win HoH, they make the keystone cops look like world beaters :P

You know why she dated a guy with three popped collars, because she attracts douchebags.

double eviction won’t happen…it’s too soon. there are 7 people in jury house. Maybe double next week or the week after.

if matt were smart he would go to brenden and tell him about ‘britt the spy’ and make a secret deal to save himself…just incase brenden wins.

brenchel wouldn’t believe it, because it was from HIM, now if someone like regan told them then they would be more likely to believe him

they would when he spills all the info they talked about in the tub. there is no way matt would know all that stuff without britt telling it.

i want to see brendon lose becuase i want to see the blow up that rachel is gonna give him, i really cn’t see him winning causing much drama now if rachel won of course but brendon being a so called “nice guy” he’s gonna play it cool, so theres not gonna be much if any “drama”

The problem with Matt telling them that is Rachel would not be able to cover up her disgust..and Brendon would have to ONCE again say I’m/We’re sorry

“Brendon is talking to Matt about his job he quit because they mistakenly fired him”. If Brendon really quit a job he was fired from then he isn’t very bright.

Brendon: “you can’t fire me, because I QUIT”

Guess his interpretation has nothing to do with his level of education.

moaner jason wrote that earlier you should come up with your own original lines and not steal others. it’s a very BBHG thing to do though :)

Please stop taking things I post so literally and personally. It was a poke at jason.

Moaner, I bet your really a Screamer!

no worries just think it’s interesting is all :) maybe you can be on BB next season :) LOL

I wonder who they will offer the saboteur job to? And why is it only if Pandora’s Box is opened? I’d love to see Rachel get stuck in the box and cry. LOL

they didn’t tell the HG’s about pandora’s box right???

Nope, not yet. It will be in the HOH room this week I think.

hahah…now that would make a good show!

did any Of the other HGs notice when lane and enzo went into DR together??? that should have given some suspicion of them being together, BRI,BRI,BRI BRIGADE YO…

Did they get called in together?????

Britney and the rest of the mean girl mentality is hillarious and the only reason I keep watching. She’s funny! Go Brit!

I’m waiting for Hayden to punch Enzo in the face for all the crap he says about Kristen. Brit totally shot herself in the foot for not using the POV. She thinks those guys are protecting her…I can’t wait till she finds out she isn’t as in the know as she thinks!