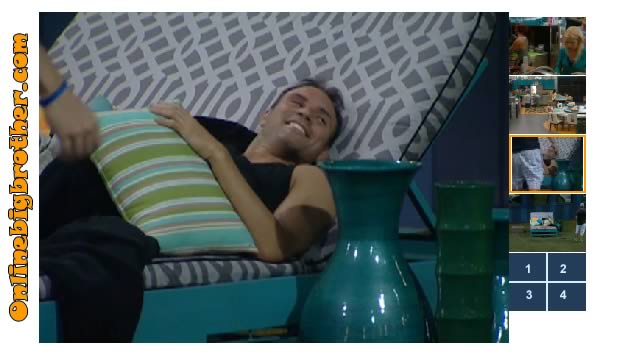 8:30pm Backyard Hayden, Lane and Enzo Walking around Lane and Hayden are playing with the lawn toys. Enzo tells them how he’s playing this game ruthless now he’s doesn’t give a rats ass if he’s backdoored on slop and fucked. He tells them he’s has to start wearing sunscreen “i have 6 v Enzo on the lounging chair. Enzo “I’m actually ****** 0ff right now” Hayden “it’s so small we can’t see it” Enzo “no i gots a hardon and i’m ****** 0ff”. They briefly talk about the have nots comp and how the other 2 teams ganged up on brit. They wonder if Brit is the real target not Monet…cams flip to Kathy and Kristen on the couch. 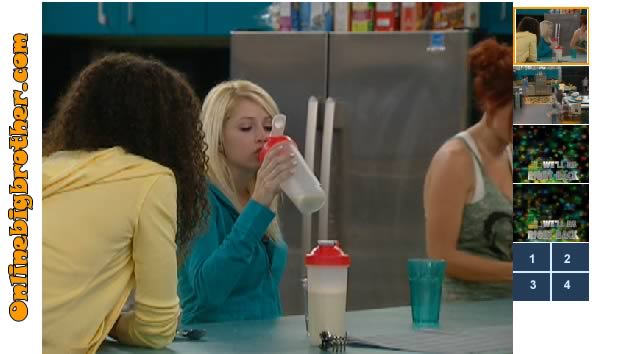 8:20pm Kitchen Brit, Monet, Rachel, Brendon, Matt and Lane preparing food. Brit is joking htat she’s going to start stealing a bunch of stuff to sell on ebay. She warns them that now that she’s on the block she’ll double her stealing efforts.

8:40pm Palm Room Brit and Lane Lane is telling her how stressed he was because he thought he was going up. Brit tells him that she knew she was going up and that Lane is being stupid ti think he was ever a target. Lane goes on to say that 4 or 5 people came up to him this monring and told him his name was mentioned in the HOH. Brit explains how crazy he is she says that Rachel told her that she’s not the target, “do you think if I wasn’t getting nominated she would say that?… she would of said I wasn’t going up if I was safe” Monet joins them.. Lane asks her hows she holding up. Monet says she’s upset Lane tells her he thought he was going up. Monet says she never heard that but she knew this morning when she was going up from how Rachel talked to her. 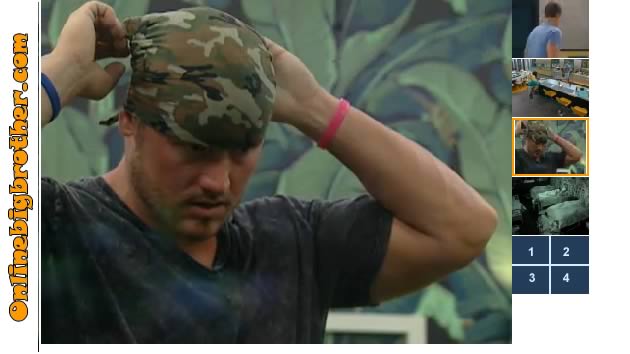 8:45pm Palm Room Lane and Matt Getting ready for war There talking about whos going up next week and getting ready to work out tonight. Zane is putting on a bandanna saying “i’m on the rag tonight”. Matt says he’s putting up one of them two Lane tells him they need to win HOH and it’ll be them 4 against the other 3. They joke around that if they need to lose a member they’ll try and talk Enzo into going home Matt “We’ll tell him he’s gotta go home so the others can advance” 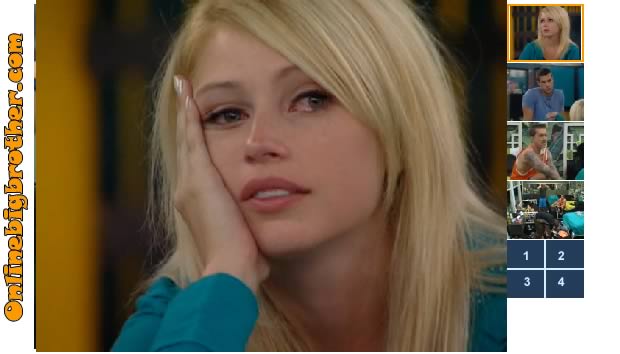 8:55pm Monet and Brit in the Cabana Room hating on everyone They’re pissed and start bitching about the house while they do their nails. They call kathy a Dirty Hag becuase she never went to talk to them after they were nominated. . over the PA big brother tells Kristen to move her microphone. Brit: “Kristen please lower your pants” Brit: “There riding up your ass” Monet “why the fuck does everyone ask us how were doing “We’re fucking doing GREAT we’re on the block!”
M: Enzo can be trusted but he’s got a big fucking mouth
B: Big fucking mouth
M: Oh this is stupid stupid people
B: Like what are we suppose to do
m: those people act like we have lporasy
Brit bring sup that she only respects the people that came up to them and consoled them.. Enzo and Matt, “the rest of them can suck my nuts” They both comment on lane not coming up to them like he did with Annie.
They talk about there hair and nails and head out side.

I feel so bad for brit :( the shes going to suck if she leaves with rachel thinking shes the queen bee

Britney causes so much drama how is she dumb enough to think people aren’t going to hate her and try to get rid of her because of it.

ENZO is hilarious and disgusting

i’m watching BBAD and Britney is really working Rachel over.

I hope Rachel sees through this bullshit. That chick will toss her and Brendon on the block in a heartbeat if she manages to connive her way into staying. It amazes me that Briney goes from the Godfather to the ass kisser so fast.

I agree 100% – you took the words right out of my mouth! Listening to her lie and cry for the past hour is annoying and hilarious at the same time! Good riddance, Britney! : )

First, make up your mind Monet, does is suck or does it blow???? I though that Britney’s act was good, but WOW, are you watching her little butt buddy on Showtime? I’m getting the award for best actress, worst fake cry ready to hand out. This fake beatch can’t even get any tears to come down her slimy face. Did you see her face when Rachel hugged her? It almost looked like she was going to start laughing ‘cuz she is that bad of an actress. She and nail biter had the whole plot ready to destroy Rachel and Brendon. I wish we could tape that shit and play it for Rachel.

Again, I agree! Wish they could see all the BS going on. My favorite part was on last night BBAD when Britney picked up Rachel’s purple shirt, looked at it in disgust and throw it back down on the bed. Ugh, I can’t wait until this is over and they see all smart ass comments and looks!

kinda gettin’ tired of Enzo’s mouth. wonder if he acts like that all the time or just lettin’ loose because he’s in this house. doesn’t seem like someone i’d wanna hang with.

theyre going to show rachel like 24/7 with her annoying LAUGH! omg i would kill my self if i was in that house

I think right now the house evicts Brit even though Monet is the bigger threat in phsical comps IMO.
I think alot of the house is turned off by Brits remarks towards other houseguests.

brittney and monet are both so annoying, they think their so above everyone else. i’ll be happy with either of them gone this week.

Ok, I can’t stand it any longer. Had to register so I can vent. There are so many things that Rachel does that annoys me, but I HOPE she can see through Brittany and Monet!! What lying, low down, shallow girls. Watching BBAD and hearing them both say that they have never said anything bad about Rachel….????? WHAT? The don’t have ANYTHING good to say about ANYONE. Ok….I feel better now. :0)

Problem with this strategy is the whole house will be telling Rachel & Brendon otherwise.

On one side I think Rachel is genuinely a very nice person but on the other she is a bit unstable emotionally if she is getting upset about nominating 2 people who want her not to win $500K.

OK, Is there any way Britney, Monet, AND Rachel can go home???? Britney and Monet are mean as hell, but Rachel, Rachel, are you for real???? You are officially DUMB AS A BAG OF HAMMERS for falling for there obvious bullshit!!!!!
Monet:”Kathy won’t even look at me.” Uh, didn’t i just see you talking with her two minutes ago you lying duplicitous piece of shit.

Yo, I seriously think you need to calm down…. talking and giving eye contact are two totally different things… that being said I think Rachel put up two people that can literally contribute nothing to no one, I hope 1 of these three win POV

Cxntney, don’t worry. By the time the show ends you can go and audition for the Bacherlorette? You not only bad mouth yourself off the show (ho), but Im sure your boyfriend wont want anything to do with you either after seeing you the past week. The only thing missing from this scene are 2 more phony hos feeling sorry for themselves, a bottle of wine, and stories about what a gtreat guy “Jessie” was. And it figures that Twatney even had to get in a cheap shot in at Kathy, who has done nothing (literally) to anyone. maybe It’s to bad that they both aren’t named “Heather.”

enzo is funny…monet & britt might be annoying to other houseguests but they give the show the entertainment it lacks. Boring kristien & kathy do nothing to spice up the game while rachel & brendon try so hard to convince us that they are the next jeff & jordan(which they are not) more like watching ronnie & awkward mitchel in showmance. The rest of the house is playing smart but not too risky yet….Early days though!!

I hope Britney or Monet get HOH next week and get rid of Brendon or Roachel or both.

Kristen is a waste of space!