12:40pm Lane is joking around talking to Ragan. Lane asks Ragan if you win HOH, do you want me to pick you up and hug you or pick you up and spin you, or hug and slam? Ragan says no slamming. Lane asks if he should run to him or should Ragan run to him. Ragan thinks they should do the slow motion run. Ragan says it would be okay if Lane acts extra excited and jumps around a lot. They agree that they shouldn’t chest bump because Ragan would end up at the other end of the yard. Enzo says that it is going to get crazy, get ready. Enzo says and we think it’s bad now… Britney comes into the lounge room and Lane says you put me in a bad mood. Britney asks him why and he says because you’re always sad. Lane and Britney think Monet should talk to Andrew to see how he’s going to vote. Britney says that she doesn’t think there’s enough time. Lane jokes around and says flash him, use your assets! Lane says she can talk to him about anything. Britney says so if I come to you and want to talk about my period, will you? He laughs and says yes. They are now talking about what they think might happen next week. Britney says if Kristen, Ragan, Hayden, Brendon gets it, I’m gone. Britney tells Lane, the only people I’m safe with are you and Enzo. They talk about who they want out. Britney says she still wants Brendon and Rachel out. Hayden says it will all change after this HOH. Lane says that no one is completely faithful. Britney says she would protect their side of the house first, no matter what. Britney says Kristen would be the first one to go because she is definitely just floating with the other side. Monet comes into the room and tells Britney that she is freaking out. Monet tells her that she is trying not to freak out because she doesn’t want to cry if she leaves.


1:35pm – 2pm Lane and Enzo are joking around with Britney saying she is going to be a star in Arkansas and that she might get beat up by some girls every once in a while, but other than that her life will be great after the show. They tell her that she shouldn’t worry though because lots of people will love her. She shouldn’t worry about the occasional black eye. Britney laughs. Matt asks Enzo if he is going to rock the hat tonight. Enzo says his hair is at a perfect length right now and he thinks he might just rock the hair instead. Monet is crying saying if she gets evicted she will have nothing to say to these people. Britney is upset now too and says I don’t know what I’m going to do without you. I have nobody. Monet says I don’t understand, all of this stuff could have been avoided. She is really mad at herself. Britney says Matt will 100% go after Brendon and he’s stupid to keep him. Monet says it is their own stupid fault. Britney wonders what Hayden would do. Monet says vote for Matt. Britney says no, if he got HOH. Monet says the only one that I’m sure he’ll keep is Kristen. 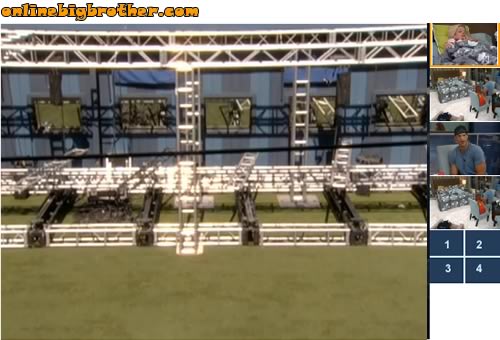 I think if Andrew does freak out, he is going to be real ugly. This guy looks like someone that can blast you once he lets go.

Thanks Simon and Dawg for these posts. You both do a great job at keeping us informed. How do you donate to the site? I don’t have the live feeds or BBAD, But my father in Chgo has BBAD so we swap info from your site and BBAD. I’v been a fan since season 7 and tried to find the rest on dvd but only could find season 3 for $99. and so far this one is the worst one I have ever seen. Too Much B/R. BB producers need to put some twists in to stirr things up. Thanks YA” All” your coments have been very interesting.

Hey Texas Girl, Thanks for the support we’re glad you like the site. The donation button is at the bottom of most posts. Just click on the post title and scroll down you’ll see it.

I may be WRONG!!!!, but it likes like tonight’s competition has a football theme. Maybe they are going to see who can kick Kathy the closest, if not over, the goal post!!!!

whatever happends long as brittney, lane, matt, or enzo wins HOH thats all i care about