11:50pm HOH Lane and Matt Matt is giving Lane the rundown of where Ragan stands now. He says that ragan isn’t going to put up hayden, bur isn’t sure about Lane or Enzo. He thinks that B/R will put up Hayden and Kristen because they’ve been talking about putting up a players that dropped early and are also a pair. Matt says Kristen thinks Andrew is going after B/R and she’s talked more game to him than most people. He points out that Kathy is usless in comps so don’t expect her to win next weeks POV or HOH but with Andrew there is a good chance we could win them and if we know he’s going to take out b/r then we don’t have to worry. Lane argues that keeping Kathy might be better because they can control her vote whereas Andrew has some other agenda. Matt thinks it’s a toss up but he’ does know that over the next couple days as thh house talks the vote will be unanimous. Matt doesn’t have the remote for the spycam so he needs to peak out the door to see if he can get hayden and Enzo up there… sooner or later Rachel, brendon, Brit, Ragan come up Lane leaves…

midnight HOH For some reason Britney and Old Britney gets brought up and ragan says “Britney baths with mr bubbles “….”old britney baths in her house guests blood “. Britney starts doing the voices, she says she has a very good witches voice when they call her into the DR she says. “I’m not coming to the Diary Room,” (in her witches voice)… everyone starts to laugh. 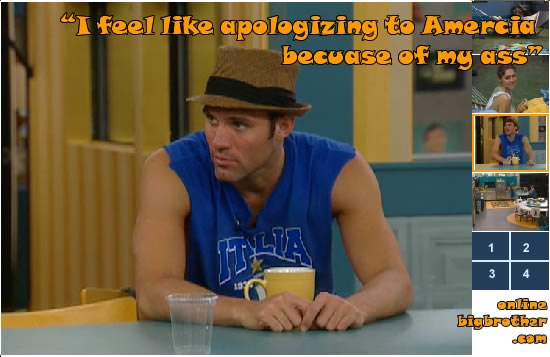 Midnight: Enzo has something to tell us all

Andrew should say sumthing bout kristen and hayden if he leaves so that they will find out about the (bergade?)

Kristen is not a part of the brigade so telling the house about them will not give the brigade away however it would make them a target due to the couples theory. Andrew should however make a deal with Hayden/ Kristen saying he will keep their makeout sessions a secret in exchange for their votes.

After watching last night’s episode, I see Matt never intended to put Brendan or Rachel up. He is playing both sides, and the brigade is too dumb to see it. I was hoping Andrew would come out of this ok, but talk is now on getting him out. They think Kathy is easier to control, which is true, but I like Andrew. If he goes, the only person that will keep me watching is Brittany. This season just keeps going from bad to worse.I hope Andrew can sway some votes and stay. Unfortunately he needs 5 to stay, because if its a tie vote, Matt has tiebreaker. I think he has Brendon, Rachel, Brittany and maybe Ragan, so he needs to work the brigade for another vote. Lane and Enzo seem to have made up their minds, so now its time to go to Kristen and quietly tell her that he knows the secret and hasn’t said anything, and also tell that he has heard the rumor too. Promise to help Hayden and Kris keep their thing secret and help them quash the rumor (not really a rumor) that Rachel is telling everyone. I think everyone except the brigade of dummies knows, but only Andrew knows how hot and heavy it has gotten. I don’t see any other way for him to stay. It’s a shame, because I think we would have seen good gameplay from him once it got down to 6 players.

I could not have said it better myself !!!. If I were Brendon and had half a brain and noticed that Enzo Lane and Hayseed hadn’t done anything and yet have not looked worried at all ….things that make you go hmmm. My move woulkd to be to expose them by putting up Mat and enzo ( because I am from Jersey and he makes us look bad ) and make it known that if they or somebody else wins veto and takes one off I will choose another one from the crew. that should get things started