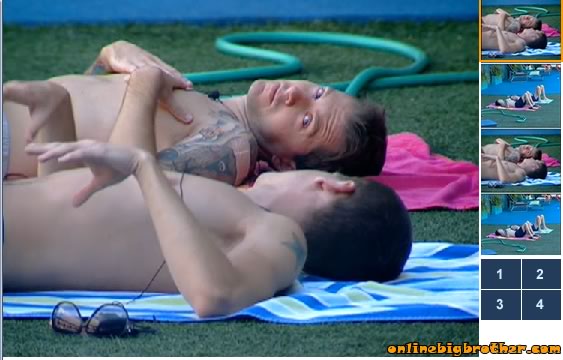 5:05pm Ragan and Matt working out Ragan telling him about the machines at his gym and how they are so much better then what they have to do in the house. Ragan’s worried that he’s eating too much food lately. Ragan bring sup that he thinks if there is too friends int he house that they have nailed them. He don’ts there every was though.

5:16pm Bathroom Brit is doing up her hair for a DR session. They are talking about how b/r weren’t set up to be a couple in the house. Lane mentions that Brendon and Rachel think they are the hottest guy and girl in the house, “they’re so delusional”. They talk about how production casts people to fill a particular roll. BRit thinks that Hayden and Monet were set up to be the couple, she jokes that lane and her were cast to not get along. Lane: “whys that?” Brit explains that she is emotional and polite and he’s Rude. Brit says that she thinks Matt better go next week she says he came on here to work his game and win were everyone else seems to have other side motives. Brit jokes to him about her not making out with him ever. Lane says he never would want to make out with her, Brit “YEAH SURE”..”i’m not your type you like trashy and skanky” Lane: “Why do I like skanky?.. I like hot girls”.. “Skankies don’t have personalities”. She asks him about her hair then heads to the DR as she walks away she tells him the chicken if she takes to long.

5:26pm backyard Enzo, Lane on the couch, Matt on the elliptical and Ragan out in the yard stretching. Their joking around about being famous after the show is over. Talking about buying an apartment and having people film them when they go to the bar. Lane brings up the Jersey Shores says there a bunch of dumb fucks and look how popular they are. Enzo: “It’s all about confidence and I got tons of it”.. Lane:”we got a jersey, we Detroit we got a southern guy we got a pretty boy” Enzo: “Yeah but Hayden has to cut his hair a bit” Lane agrees “We got to fix his fury ass up shave off the mane” Enzo laughs says that people watching us must think we’re idiots we have a 1 in a million shot making any career over this. Lane notices ragan stretching and comments that he has very long arms. Enzo says he needs them to grab cocks.. Lane doesn’t really laugh, enzo quickly says ” ragans a nice guy and all but he’s playing both sides and he’s dangerous” Lane brings up how Kathy was campaigning yesterday trying stay off the block, he laughs says she keeps telling us she needs the money and must go to the jury house. Enzo laughs “People are getting desperate up in here yo” Lane says that Kristen is doing some campaigning now, He knew she was throwing him and Enzo under the bus these last couple of days. Enzo asks if hayden is ever coming out of the taj room? .Enzo about Hayden: “come on man tell your sister she’s going home..enough already” They joke about hayden and Kristen being related and how HAyden campaigned against his sister. Lane (joking): “Once the Brigade is known I want us to be so hard in here that people are affraid of use outside”..”I want the brigade to come out and everyone is freaked out scared shitless” enzo”i want my parents to be scared of me”..”I can’t wait for the Brigade to come out”. Enzo mentions the plan for this week is for them to throw the HOH comp once Brendon is out. Lane tells him Brit might get it but she is also waiting for double eviction. Enzo: “what hapens if that donkey gets it” (ragan)… Kristen walks out tells them how much it sucks right now..

sooo rachel is his type?? damn too bad brendon got their 1st LOL

“Enzo laughs says that people watching us must think we’re idiots we have a 1 in a million shot making any career over this.”

ummm yea pretty much everybody who ever got famous on a reality show, 1 in a mili chance of making it…..

‘grabbing cocks’ is funny! Come on Lame.
Ragelle is running the show and doing a damn fine job of it….and FYI she dont look half bad without makeup. Not as sweet as Brite but at least Ragelle dont look evil.

Roach is ugly, ugly, ugly. Not to mention fake in every way. She needs make-up and plastic to try and make herself look attractive. It does not help in the least.

Britney, on the other hand, is naturally good looking. She does not need makeup or plastic.

If anyone could get an acting career after this show, it is her. She is smart, she is funny and she is naturally beautiful.

Britney’s mostly pretty, except for the lazy eye. Rachel isn’t too bad, I think she looks better without the hair extentions, but needs lotsa make up!

how do they know there is a double eviction next week? does the show tell them or are they just using past seasons as a guide?

there using past season as a guide

I agree. To much the same ole’ same ole’.

Rachel is channeling Janelle. They both were VIP cocktail waitresses, but to be fair, there’s not much else a woman with big boobs can do in Vegas. I say shake it up CBS. Invite a washed up celebrity,say Mel Gibson,into the house to spend the wknd. Get him full of booze and let er rip!

That will be a must see

I LOVE Mel Gibson! The man is HUMAN AND shouldn’t drink! Other than that how can you judge him on one or two screw ups. How many of you have not had at LEAST one or two things in your life that you are TOTALLY ASHAMED OF!!! Especially when DRUNK!

I think Britney and Lane are the ones in the lifelong relationship. I think they are engaged to one another and will receive extra money if they keep it a secret and make it to the last two standing without anyone else in the house or us in the audience figuring it out! Just sayin’

I thought someone on here saw Britney financee Facebook page and Britney is all over it. It is not Lane. At least that is what was said.

Long time follower, first time post.. I love this site.. Thanks so much Simon and Dawg..
Here is a thought.. i know it probably wouldnt work.. but anyways, I think that since it seems that no one wants to win HOH this week, due to the possibility of a double evection.. why not throw the comp to Kathy.. she is expendable so what is a target or a little blood on her hands gonna change.. that way she can be the one to get B/R out, then she can get put up the next week and get her wish of going to the jury house… like i said just a thought.. heck Kathy would probably still lose even it was thrown to her..LOL

Simon
Reply to  Sleepless in Augusta

Glad you enjoy, thanks for commenting