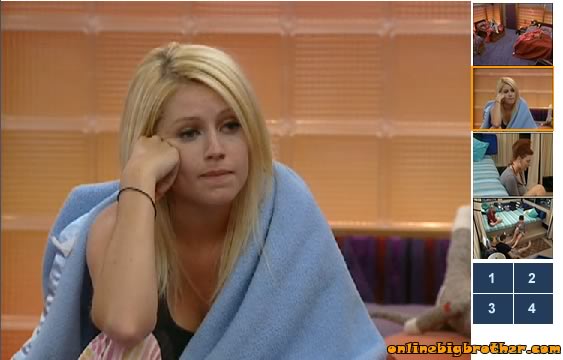 
9:50pm Taj Room Kristen and Brit. Kristen is campaigning, she’s giving her the same speech she’s gave her yesterday and earlier today. She wants people to vote for the person that will further her in the game not based on what the HOH wants. Brit will be the only girl left after the boys take out rachel and kathy. Brit says she doesn’t want that to happen. Kristen offers Kathy final 2 says she’ll go after Brendon and rachel, she knows she can win the HOH comp because it’ll be physical. Brit is bored to tears she tries to change the subject to the HOH comp but Kristen keeps going back to her angle. Kristen says she hasn’t seen Hayden campaigning, asks “shouldn’t that be a red flag”? Brit says that Hayden is acting very nervous and he’s been talking to everyone all day long. Kristen says this vote is going to be really close she’s talked to people and she’s shocked how close it’s going to be. (Krsiten is trying hard reiterating the same speech over and over nothing is working)

10:10pm Backyard Lane and Hayden Talking about how they need to get Brendon out. Lane brings up how it sucks that Kristen is leaving, “you got to hand it to her she is really fighting”. HAyden agrees, tells Lane that she a good girl. Hayden explains that he knows it’s a game and he’s here to win so either she goes now or later, lane: “Sucks that she’s sooner though” Lane brings up how strong a competitor she is and how they may be in trouble later in the game if she would stay. Hayden out of the blue “goddamn we need to get brendon out”. Lane: “its your time Hayden the way things are going you’ll win it”.. they continue to work out for awhile lane says “this house is getting thinner and thinner”. Hayden: “one of us 2 need to become friends with Brendon and Rachel”. Before Lane can say anything the sliding door opens and we hear “HEEEEEEEEYYAYYYEYY WUD UP” Rachel walks out tells them that she’s counted the whole container of nuts and found out that the packaging is wrong it’s only 20% other nuts not 50%… She heads back inside.. Kahty comes out starts to smoke.

10:25pm TAJ Kristen and MAtt Kristen campaigning.. tells him the same as with Brit except she doesn’t offer final 2. She adds that if Brendon wins HOH chances are she’s going to be put up. Matt “Thats good to know” 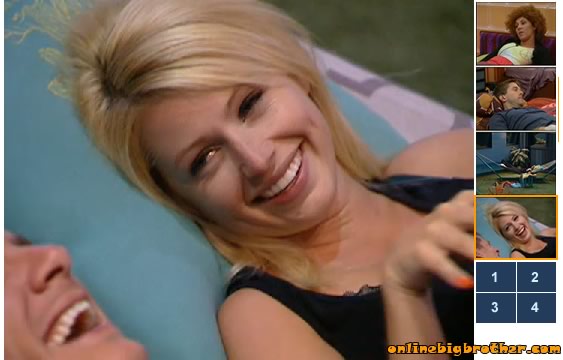 10:30pm Hammock Ragan, Brit, Hayden on the elliptical and Lane working out They wish they had told Brendon to go talk to HAyden when he was in confinement in the have nots. HAyden starts laughing “Thats the ultimate trap”. They continue to laugh about Brendon and how he talks forever, Brit tells Ragan he better not leave her alone around Brendon again because he does it ever night and she’s not getting sucked into that black hole again. Brit asks what breaths better a fish out of water or Brendon’s thighs in those shorts. Ragan: “Whats higher a hippie smoking gange in the 1960 or Brendon’s shorts”. Brit: “He’s wearing some Daisey dukes”. Ragan says he can’t believe Brendon and Rachel are inside counting the amount of nuts in the nut containers. BRit” this is what its come down to”. 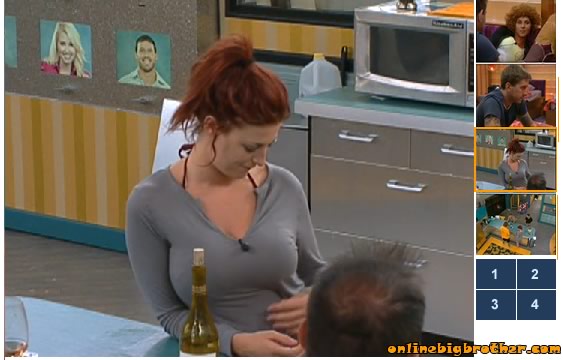 10:51pm Kitchen, Brendon, Enzo, Rachel and Hayden hanging out drinking. Enzo did the mistake of bringing up that Hayden is part Native American because now Brendon is telling them about family friends of his that are and his “africian Amercian friends are part native Amercian” etc etc .. Rachel has had one glass of wine.

yeah, because it really sucks when people actually talk…instead of playing pool all day…WOW AN UPSET YO!…30 minutes later…Brenden is a douche YO, POOL.

the funny thing is, brenden is probably twice the person any of the others are…its obvious to anyone that respects loyalty, and someone who is genuine…guy has issues, but it doesnt make him someone who should be made fun of…its obvious he had an injury or scoli and that is why his posture etc is messed up

sad to see this high school stuff…they complain brenden talks too much? please…there is more complaining about brenden than anything…why? because hes kicked a@@ in comps and they are frankly jealous.

Allison Grodner’s Uggz burst, so she is wearing some swimming flippers, and Entteman’s cake labels LIE!

I hate hate hate hate Rachel now. She HAS to go. Bring Kristen back after she’s evicted and make her HOH. “Expect the Unexpected!” She’s in such a lose-lose situation. We all know she’s going home. I love it how Rachel is bashing her in front of Hayden for campaigning. BUT if she weren’t Rachel would say, “That floater doesn’t even want to be here.” AHHHHHHHHHHHH! I am sooo angry.

Rachel and Brendon are not thinking at all. Why aren’t they questioning why Hayden isn’t campaigning????? Because he doesn’t have too. Dumb!

Sorry to respond to my won comment…but SHUT UP Rachel!!!!!!!! “I’m like, loyal, and we have the strongest relationship of anyone in any Big Brother history.”

I sincerely hope Hayden wins HOH and puts them up.

and by won, I mean own

I hate Kristen, I hope she is gone ASAP!!!!!!!!! She looks like an alien, those eyes are scary and she sucks!

Either youre a gay male or a jealous female cause Kristen is HOTTTTTTT!

Kristen is hot? Man, I kinda feel sorry for wherever you have to live if you think that… anyways Britney looks much better.

I agree with Kar. She looks like a space alien with those eyes of hers. She has the fat gene, too. Five years from now that face and that ass will explode sideways. Even now, her body doesn’t look right for some reason. And she’s extremely shallow. Rachel is a party girl, but Kristen is the stupid one.

Kristen is reaping what she sowed because she is one of the main reasons Monet is out of the house. She wanted and suggested that Rachel put Monet up. IDK why females can’t stick together because now they are being picked off one by one. When will females ever stop being so jealous of one another and stick together. Good bye Kristen because you are getting as good as you have given!!!!!!

Yeah I agree!!! I was all for Ratchel and Brendon. Now after seeing how Ratchel hears what she wants to hear then on such a power trip, and acts like a baby when she doesn’t get her way!!! Run Brendon Run Run far far away.

R/B attempting to throw Kristen under the bus to Hayden right now…(not working).
Rachel talking for both her and Brendon, not letting him get hardly a word in edge wise…and she said “at the same token” AGAIN (get. a. new. phrase. woman), ugh I want to stab my ears.

I haven’t seen a girl so jealous of another girl like Rachel is of Kristen in a long time. Sad.

I know! It’s hilarious how Rachel continuously says she’s gunning after for Kristen strictly for game play and strategic reasons and none of it’s personal, HA! Right…

Just wait til Kristen is gone and she has to turn on Brit for getting all the males attention in the house! God she looks grooooosss as usual right now!

Eventually she will have to get Kathy out too, once Brit is gone. She can’t have a well preserved cougar stalking her man. That is a real threat. LOL.

She has been jealous of all of the women in the house. And because of that, I think the absolute worst part of Kristen leaving on Thursday is that we will all have to suffer through listening to Rachel once again screeching in her video message, “No one is going to come between me and my man!”

“Why do these peanuts taste like Pussy”??? I luv u Brit!

Hahaha this Lane/Enzo hot tub chat is quite entertaining!

I dunno. Enzo sounds like a bigger ditz than Rachel. He’s full of shit. Sounds like a freaking idiot when he speaks. I am getting really annoyed with him. He should rather be on that idiot show Jersey Shore or whatever it’s called. I like Lane and Hayden much better.

I bet that HOH room smells like ASS!!! Take a shower HOAR!

You gotta say it with the enzo flair….HOAR!

Kristen has big azz feet! They are like mini surf boards….she should have lasted longer in that comp and maybe she wouldn’t be going home right now!

Well, I think she would have nominated better HG’s for eviction than Matt did.

for some reason i feel hayden gone win thursday

I notice Rachel is still eating the nuts. Do they smell like home????

awww damn i got that one HAHAHA

Brendon, you better hope you are never caught in the dark with Lane and a flashlight. You already look dazed and confused. BANG!

She is always looking at her gummy bears… are they new? Does anybody know? For Pete’s sake, who watches their own breasts!

I don’t know how new they are but they were purchased. BB Dirty Pleasure, I don’t look at mine anymore than I have too. They use to say if you can hold a pencil under your breast they sag to much. I can hold a box of 78 craylons under one and a jumbo color book under the other! Nope, don’t look much at them anymore.

Well as long as ou can hold your pills and a drink that is all that matters! Speaking of….BRB!

With the pills I take, it only takes one drink. I am a cheap date. But I don’t pull my skirt up or my boobs out. Not since the late 70’s.

I think I see Brendons cock and a bottle of tequila under Rachels!

Well, I ain’t going to look but I am damn sure they aren’t under mine!

BBGrandma, you’re a girl after my own heart. I too was once able to do the (not that I actually tried the crayons) back in the 70’s. Your comment almost made me fall of the chair. You are too funny. Am loving you.

Ditto Hellos, almost fell to the floor. Grandma is too funny, I once could do the same back in my day of 70’s too. Cancer too care of that, but all is great.

BBGrand, you’re a girl after my own, love your sense of humor

“after my own heart”