Andrew is telling Kathy on the backyard couches that everyone thinks he’s the saboteur. Kathy says he shouldn’t take it personally. Matt gets called into the diary room. Lane jokingly asks him why he’s always called in first. 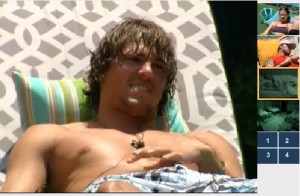 11:50am Matt and Hayden on the backyard couches talking about their strategy. Hayden told Matt that he told Brendon that he wants to talk to him later today. Matt says that Enzo wants the four of the brigade (Hayden, Matt, Lane, and Enzo) to meet at 4am in the morning. But Matt thinks they should do it in the middle of the day because everyone is outside. Hayden says I told Brendon in the kitchen that I want to talk to him later. Matt says that Enzo keeps saying we need to meet at 4 in the morning but we should just meet in the middle of the day because everyone’s outside. Matt and Ragan start to discuss the upcoming schedule . They think that the POV ceremony will be Sunday and that Have/Have not will be Monday. The talk then turns to the saboteur. Britney tells Enzo he’d be the worst saboteur. Enzo agrees. 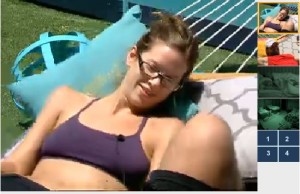 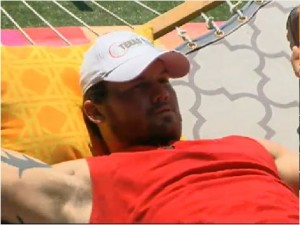 12:30pm Lane and Annie are together on the hammock talking. Lane says your man will hate me because he’s sexual with her. Annie: You’re the typical guy I would want to have as a friend with benefits. Lane says I’m not the relationship type so it’s a win, win. . Annie tells Lane on the hammock she doesn’t want to change and she wishes people could believe her. Annie says her stress from her family is affecting her more than she thought it would. Lane doesn’t want people thinking he’s always scheming and he wants to be alpha male. Lane: I’m not saboteur, I’m not that smart. Lane tells Annie a story about a prior girlfriend on the hammock. Lane says that he made his girlfriend sleep on the floor because she cried. The talk then turns to Justin Beiber. Lane asks Annie if she’s attracted to Justin Beiber and Annie says EWWww he’s 14! Lane then asks do you like 69ing? I do!! They start talking about when lane lost his virginity. Lane says he was living in Oklahoma and no one he knew was having sex, then he moved to Texas and dated a girl for a year who didnt want to have sex till marriage and he was kind of relieved because he felt a lot of pressure to be “manly” and he was nervous about having sex. Lane says that when they broke up, this cheerleader was hitting on him hard and one day he went to her house and they were making out and she just did it and he was shocked. 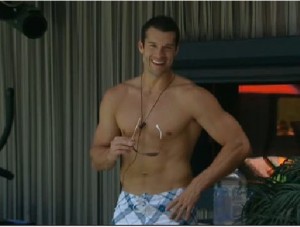 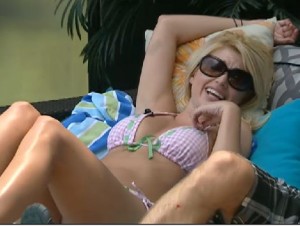 12:50pm Enzo, Britney, Matt, and Rachel are on the backyard couches making jokes about the saboteur. Britney says they’ve scared him away because they made fun of him. Enzo makes jokes about TV shows and the saboteur …Who wants to be a Saboteur!? They all think the saboteur is a joke. Britney says the jokes on you too douche you couldn’t eat from the storage room either. Matt says the saboteur better step up his game but he’s probably pissed at us. Britney said she doesn’t even care about the X on her face and that it was lame. Matt asks Britney if she’s still on Birth control and she says yeah, it keeps you regular. Then Britney says that you are extra fertile when you go off BC. She says that she doesn’t want to have a big brother baby, like if one of you guys gets messy in the hot tub and we jump in there.. They all laugh. 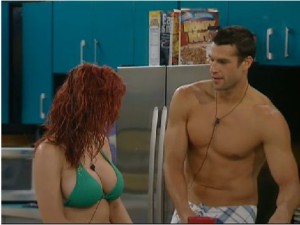 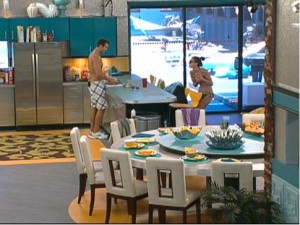 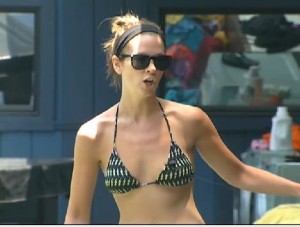 Brendon is in the kitchen making lunch. Annie comes into the kitchen after putting on her bathing suit and puts her mic on and goes to head outside when her mic code gets caught on the chair and pulls her bathing suit top off!! Annie yells FUCK! The first boob shot. Brendon tells her to go to the wash room to fix her top. Annie goes into the washroom and tell Andrew that she flashed the camera. Andrew doesn’t believe her and she says no really I flashed the camera. Andrew says what America gets to see it and I don’t!? Annie then goes out into the backyard and tells the group that her mic cord got caught on the chair, and her top was pulled off. Matt joke that the saboteur is going to get the picture and post it all around the house.

I like the four guys. I hope they make it interesting because the women this year are annoying (minus the cop). OMG I hate myself for wanting Nasty Natalie back LOL.

If I hear the word like one more time from Rachels mouth I will lose my mind. For a chemist she sure has a super bad vocabulary. Like Super….lmao

hey someone post a pic of the slip can’t find it anywhere.