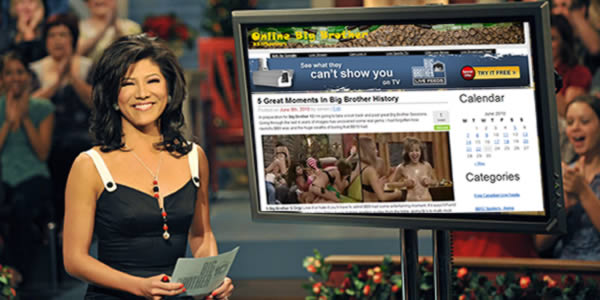 Big Brother would not be the same if it wasn’t for our beloved host the Julie Chen…. WHAT!! have I gone mad, whatever happened to our Julie Chen Hate? The truth is the hate is gone, slowly dilutted away by the general loathing of the other house guests (Heres looking at you boogie, Jameka, Ronnie, that muscle guy from bb10/11, James, Chelsia, Shannon.. actually pretty much all of BB9 minus big bad behind bars balla….. JUST to name a few)

Over the years the now 41 year old Host of Big Brother has grown on me, she’s always the same never changing like that of a robot. hmmm.. I do love robots, maybe this is the reason for the change of heart. Honestly though I think the real reason i’m happy with Julie Chen is the fact that she’s has stayed constant since she started the show, the only real change was her BB11 Baby Belly. In a show where anything can happen “Expect the Unexpected” it’s nice to know that one aspect will be a copy from season to season. If you think they should have Julie’s roll changed or even expanded in the show than ponder this, what would happen if they gave her the wizard power this year?

The interview below is from the LA Times they interviewed a couple other reality hosts, check it out. SOURCE Whats your pre show ritual?

What’s one quality a good host must have? You have to know how to go with the flow. You never know what contestants are going to do, how they’re going to react, and you have to be quick on your feet. A lot of times we have meetings and try to figure out, “OK, this person probably knows he’s getting voted out,” or “This person probably has no idea,” and then you roll with it.

What’s your pre-show ritual? Last summer I was pregnant so had to not do this, but I used to get a giant Red Bull on ice ready and a lemon Luna bar because the last thing I want is to be hungry or tired on a live show, and the Luna bar has just enough sugar, and if it gets stuck in my teeth no one can see it. When I was pregnant, my snack became Greek yogurt with a little honey and nuts and dried fruit. I always make sure my tummy is taken care of before the show.

What was your first MC or hosting job? When I first did “Big Brother” 11 years ago, I had always been a news person, so I had this newsy approach — which is why they called me the “Chen-bot.” I didn’t want to show any emotion; when I did the news I didn’t want anyone watching at home to think “she’s unfair.” So I tried to be more personality-driven, and I didn’t know how to do it — and my sister called and said, “You’re a little Regis Philbin-y.” I said, “That’s awesome!” But she didn’t mean it in a good way. Now I feel like “Chen-bot” is my moniker, and I go with that.