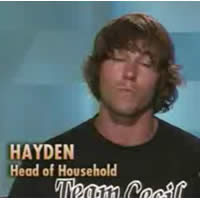 Looks interesting. I thought at first why tell the house guests about the sabeteur, but now I think it’s a good idea.

So far not a clue who it could be. Looks so cheesy with the sabateur shows up on the screen. Going to get tired of it really fast if it keeps it up.

You are so right about the video messages. Can they get any more ridiculous. I can’t wait until the sabatour is gone.

Andrew seems to be making it too obvious that he is the saboteur, BUT Brendon put up a HUGE red flag when he went to “brush his teeth” during the blackout. My money is on it being one of them. I’m hoping it’s Andrew since I am not a big fan of his already. They were the only 2 “we saw” leave the room that could’ve locked the door.

T that's Me
Reply to  Eric

My thought is that it is neither one of them. I think BB showed us that to throw us off!!! I think Brendon did go brush his teeth and I think Andrew was just being goofy. There is no way BB would show us the actual person in the act this early!!! Just my thoughts on it. Guess we’ll see next Thursday!!!

ROCKCHALKJAYHALK
Reply to  T that's Me

I agree T. I wonder if its really just BB. If it was as dark as is seemed, how could the saboteur pull that off. It’s ANNIE if it’s a HG at all.

I don’t think it is either of them. Too obvious. I’m thinking maybe Kristen or Brittany – Kristen is so low-key and didn’t react much at all like the others did when they were told the twist. Brittany has that prissy girlie-girl thing going on that would make people not suspect her. She doesn’t have to do well at competition – I don’t think anyone actually expects her to. She’s tiny, doesn’t want to get dirty or messy. Would be an easy cover-up. Guess we’ll be finding out soon, though. Fun guessing. Will be interesting to see who guesses correctly!

i agree its a good idea. just wish that they would keep it going longer.

I don’t know, I feel that they wouldn’t show a bunch of the house guests sitting in the room while the event “might have” happened. I think the producers wouldn’t want to give away who might OR might not be the saboteur just yet. We shouldn’t be able to rule out anybody at this point.

I don’t think what they showed tonight relative to the Saboteur was real either. Too many of the players were sitting in one area, remained sitting in that area during the “blackout”, and some were so close / touchable seated aside each other that it would have made it quite easy to narrow down who could actually be the possible Saboteur.

AS I stated in my earlier post – it is Annie. Watch her body language. She crosses her legs (a good thing) and cluthches her knees closes together and then draws them up into her body. She looks like she’s trying not to shit her pants or hid the no-pest strip she has in her underwear.

it’s kathy. we paused and replayed. she wasn’t in the room when the lights went out and snuck back in after time to sit down before they were on. and didn’t mention being gone and tried to blame andrew. rewatch the episode

she also was acting out when they announced the saboteur and ruined it for red in the challenge. she’s a police officer but really “un”athletic and weak

Britney & her knee injury… what a joke. She wasn’t really trying & was clapping when she didn’t have to go again. I guess she will make it to the end if she can keep this weakling persona up.

OK, still haven’t got my feed up and running so I can only go by what I saw in the first episode and of course the great updates here on the best BB site. I don’t think it’s Annie. That girl came to win the whole thing. If it’s Andrew, he is playing it really stupid, and I don’t think he is stupid, just not very likeable.

I think it could be Kathy. Really, her chances of getting to the end are slim, so $50K for making it to the halfway point could be really appealing to her. She was overplaying the reaction to the news. I would really like to see Rachel go first. Her laugh is really annoying. She thinks she is smoking hot, but she’s not that great. All I see is fake boobs and red hair and a fake personality. Showmances are bad news, and to fall into one so soon is suicide. I thought Brendon was smarter than that.

My thought is that the saboteur is probably a girl. I notice that the HGs are quick to assume that the Saboteur is a guy. Don’t they know that you can’t just assume anything in this game?

My early picks are Annie and Matt. I thought Enzo would be annoying, but so far I kind of like him, but he is definitely a volatile personality. I don’t think he would handle being on the block very well.

I watched last nights episode and so far I’m not impressed. So far I don’t like Rachel or Matt. I was watching Lane and for some reason I think he might be the saboteur. He came acrsoss to me as being sneaky or something. If Lane isn’t the saboteur then I think it may be Matt. Then again, it could turn out to be somebody who we least suspect. We won’t know for sure til next Thursday. So far Ragan is my favorite player…He seems to be funny and intelligent. Lastly, I believe in heterosexuals and homosexuals…Bisexuals just choose to be confused. Pick a team Annie!