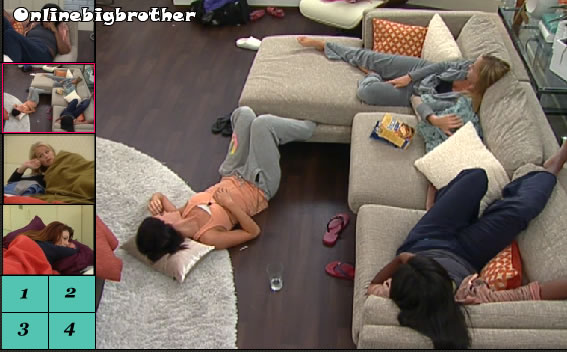 Rachel asks Jordan if she’s talked to Dani. Jordan says she did but not for very long. rachel want to know if she offered her a deal Jordan say no, Jordan adds that Jeff already talkied to BRendon he knows everything she leaves the talking to him. Jordan says that they know one of the is going up, Dani never told them but it’s pretty obvious. Jordan explain that it’s what she would do. Jordan says she’s really stressed out because for the first 3 weeks they were all really safe and they forgot what is felt like to be on the block.

Rachel gives a sob story about how hard the 4 of them had to fight to make it to were they are in the game. Rachel says they all did a wonderful job to set themselves up were there’s no threats only themselves. Rachel: “Dani BLANK it for us she did it twice with her lies”. Jordan says she feels bad that it’s before jury and someone is getting split up. Jordan: “Dani is just hear to win I guess”