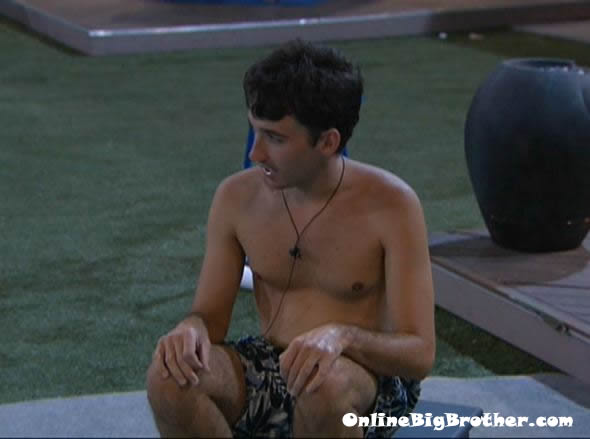 12:40am Danielle, Joe, Dan, Shane, Frank, Jenn, and Ian are all sitting around the kitchen table talking. They all watch as Danielle and Joe are playing the hand slapping game. Britney is in the diary room. Ian comments and asks what could they want from her? Ian then tells everyone this is what it will look like next week. Ian starts talking about how knows he was cast as the nerd and that he has wanted to play this game since 2001 before a plane flew into a tower.. Frank stops Ian and tells him not to make light of 9/11. Jenn agrees with Frank. Frank starts to talk about 9/11 and tells them that it had a huge impact on his life but says that doesn’t want to go into it. Shane and Jenn head out to the backyard. Jenn tells Shane that she won’t be sent out by someone like Ian. Jenn tells Shane she has been uncomfortable with Ian all night by his behavior and words. Shane tells her they will get him out next week. Shane heads inside to go to bed. Joe tells Jenn and Frank that the kid will be gone next week. 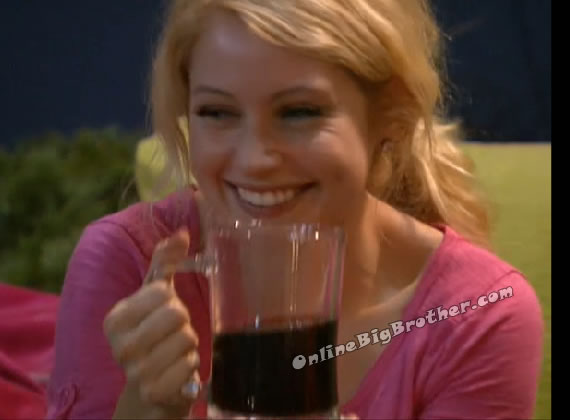 Superpass Live Feeds FREE 3 Day Trial then:
Watch the last month of Big Brother 14 for ONLY 50 Cents a DAY!

Dan :”From top to bottom which cast was more enjoyable to be with.. 12 or 14 “
Britney: “12 without a question.. no offense guys”
Dan: “Really?”
Brittney list off all her friends in the house says all they did was laugh and have a good time.
Ian: “Why can’t you drink.. Sunday? “
Dan: “I’m a have nots”.. what did you say Sunday”
dan laughs..
They now begin the long process of dividing up the beer. Ian gets 6 beers, he tells them he doesn’t care if this is the last time he drinks all season he’ll give his beers up next week. Britney gets a bottle of win Ian gets 6 Beers.

Britney toasts Ian “Ian you are my Favorite” 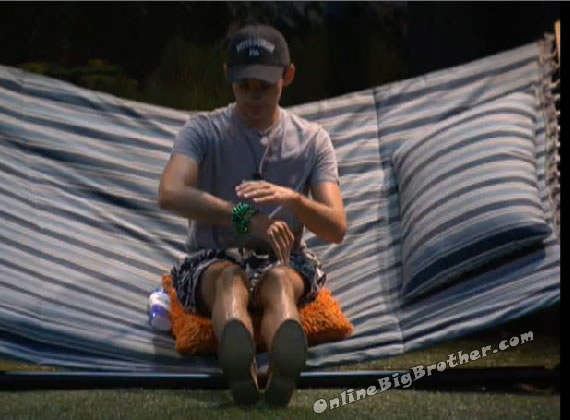 Ian tells them if he wins HOH he’ll toss Jenn and Frank on the block. His speech will be as follows
“Frank nominations without you is like halloween without candy”
“Jenn you wanted Frank out so bad during the live show now you have a chance to campaign against him and get him out yourself”

Ian tells them he now has to think of Britney’s goodbye speech. Shane agrees..

Ian jumps on the hammock starts rocking it hard.. A new player comes into the backyard sits beside Joe stats talking about them having to do something exciting tonight. Joe mentions they have another day of laying around. ? suggests they play “Bags” tonight, Joe agrees asks her when. ? whats to work out first. Shane is also in the back yard playing around with some rubber balls.. 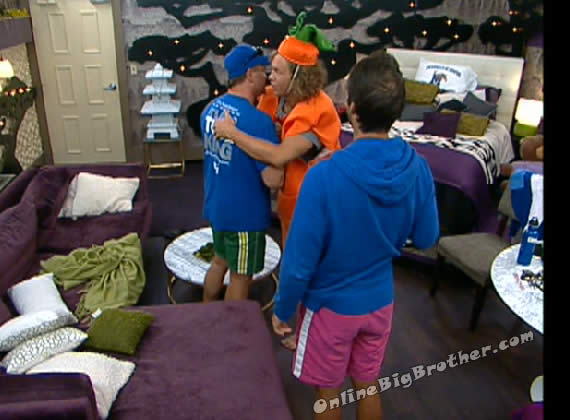 Joe is worried about Jenn and Daniele. Frank tells him they can have a final 5 deal with Jenn and Danielle and once they get to that point they have to play for the comps to win.

Joe doesn’t want an agreement with what they are going to do specifically he just wants them to agree to work together and try the best they can to get the 3 of them forward in the game.

Joe has thought Deep about it a lot this is a game changer .. this is a turning point.

Frank says that Dan will nominate Jenn and Ian. Shane thinks it will be Frank and IAn. Frank say no that won’t happen. Dan saw something in Ian during the pandora’s box comp.

Joe: “What do you think?”
Shane: “I’m willing to move forward”
JOe: “How to do you want to move forward with this and Brit.. I already said I’m going with Shane” 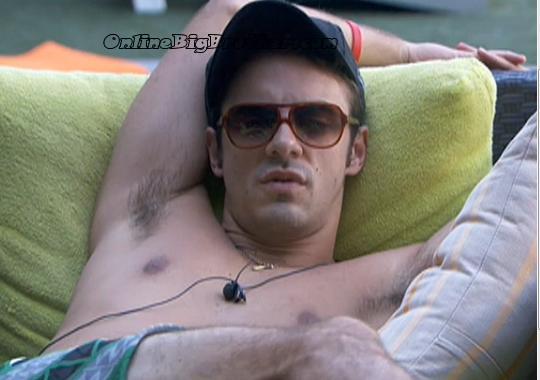 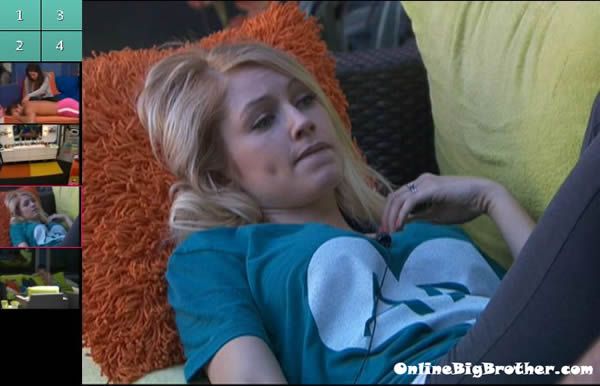 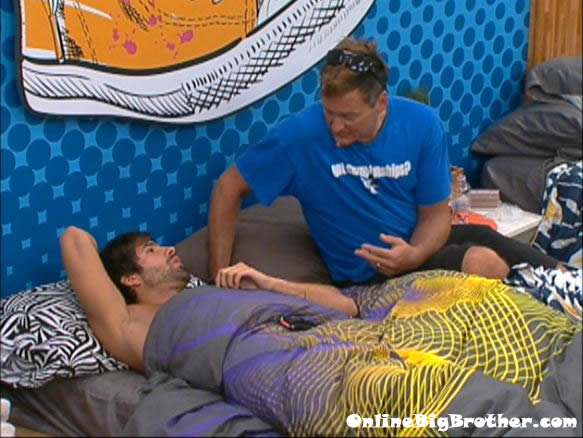 11amJenn, Britney, Frank, Dan and Danielle are in the backyard talking about random stories. They start talking about birth control. Frank says once when he was done having $ex the girls nuvaring was caught on him. He was like what is this a bear trap! They continue to talk about random stuff.

Joe comes into the kicks room to talk to Shane. Joe says that he thought about a scenario last night. Joe says that he walked out several scenarios. I pulled papers and tried out scenarios to see if I can get us to where we need to go. Joe says one asks question if we got down to the final three, would you take me or Danielle? Shane says ummm..Ahhh.. good point, uhh.. you, I would have a better shot at it against you in the finals. Joe says if we do the Frank thing… as soon as we possibly can we back door him. Joe says that Frank says he just didn’t want to be the one to put up Jenn, but we can. Joe says that Frank wants out Ian and Dan. 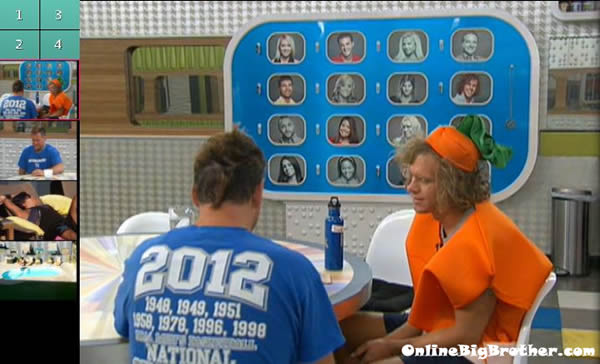 8:45am – 9am Big Brother wakes up the house guests. Frank, Joe and Jenn are the only house guests awake. Frank and Joe talk about how big of a surprise it was that Danielle did the dishes yesterday. Frank and Joe look at the memory wall. Frank says we`re close, real close. Think about how after next week there won’t be a group to worry about but us. Frank says Britney goes home, Dan and Ian go on the block, doesn’t matter which goes, Ian wins POV, Dan goes. Next week will be fast forward, Shane goes up with … Frank and Joe continue to work out the possible scenarios. Frank says that he isn`t worried about Ian winning and putting me on the block because there will be 4 votes and we will have three of them (Shane, Jenn, Joe).
Re-Watch ALL THE DRAMA on FlashBack: Big Brother 14 Live Feeds – 3 Day Trial! 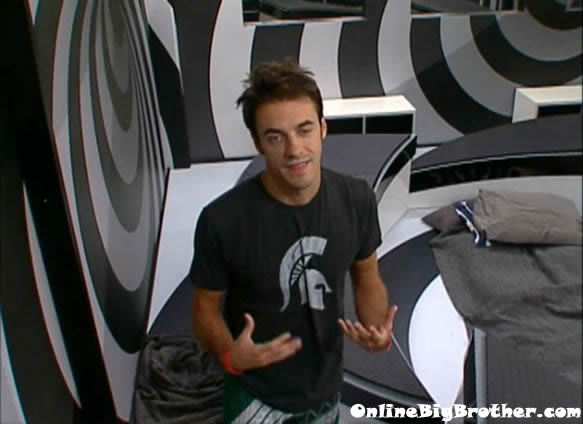 Dan in the have-not room says to the camera “That my friends at home was one of the best days ever for me in this house, good night.” He then shuts off the light and goes to sleep. 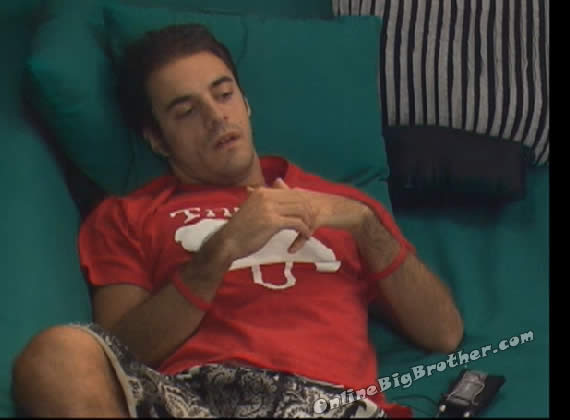 Dan: “What has Shane told you about his Vote”
Danielle: ‘He said I have it.. but that I’m scared”
Dan: “He doesn’t have it in him to lie to your face.. he will tell Britney by wednesday that she doesn’t have her vote”
Danielle: “I’m worried about Joe”
Dan: “You don’t need him”
Dan: ‘What’s Wrong… “
Daneille: “This day has been tough”
Danielle: “I trusted you Dan.. you hurt me so much with what you said.. You cannot understand how much you hurt me”

Dan: “you’ve now become the number 8 target in this house no matter what.. they will never put you and I up.. If that means you being mad at me I would rather that any day of the week“

(10:15pm cam 1.. hard to hear this conversation because of the low volume)
Danielle asks him how far will they take Frank. Dan: “until we can guarantee we can get rid of him.. we can backdoor him with 100% certainty”
Dan: “Then Ian, Jenn and Joe are gone” 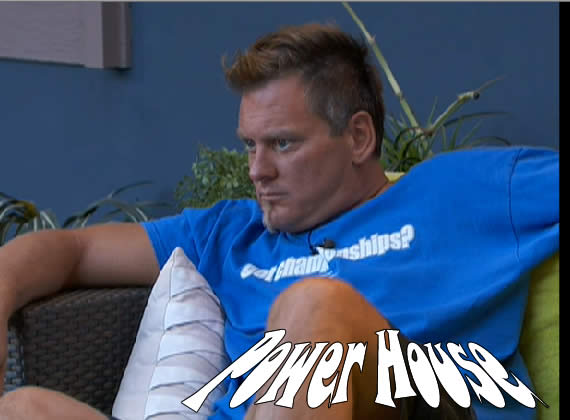 6:38pm Cam 1-2 Backyard Powerhouse, Britney and Shane
Britney tell them she wants to know before the vote if she’s going or staying. She knows that her time in this game is dependent on Joe and Shane’s vote she the ball is in their court. Joe doesn’t know who is the more dangerous player Frank or Dan. He likes Frank as a person but it’s hard denying he’s dangerous just look at the competitions he’s won. Joe knows Frank will win against anyone in the house joe isn’t writing Frank a cheque. Shane and Britney point out that they have a chance to beat dan in the final 2 but not Frank. 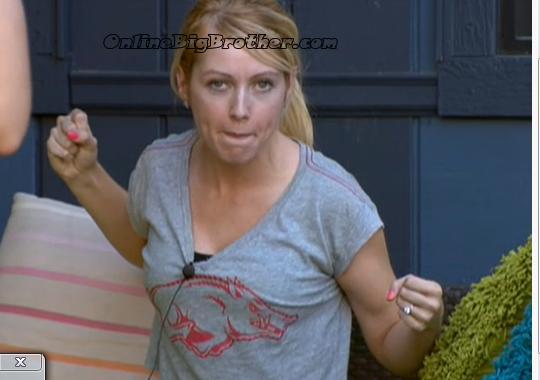