Tonight is the very first Live Eviction episode for Big Brother Canada.
This is only the second day of the Big Brother Canada Live Feeds and already so much has happened as the house guests entered the house earlier this week. By chance Suzette won the Head of Household title by answering the telephone first when it rang. Part of this seasons twist is that there is a telephone located in the storage room and when it rings the person that answers it will be given a task to complete. If they successfully complete the task they will be rewarded but if they fail to complete the task they will be punished. Suzette’s task was to keep it a secret that she won HOH and to nominate two house guests based on first impressions. Suzette nominated Tom & Emmett for eviction. During the Power Of Veto Tom won the POV and removed himself from the block during the Power of Veto Ceremony. As a result Suzette nominated Kat as the replacement nominee.

On the block for eviction tonight are Emmett Blois and Kat Yee.

PREDICTION: Kat is evicted. The Head of Household Winner could really be anyone, my guess is that Peter wins HOH. Simon predicts Tom as tonight’s HOH winner. Who do you think will win?

In the event of a tie vote Suzette votes to evict:

By a vote of 11 to 1 Kat is the first house guest evicted from the Big Brother Canada House!

8:40pm So much for a live eviction, the live feeds are back up and they are competing in an endurance for HOH. The endurance competition is a tree hugger competition where the house guests have to hold on to a tree for as long as they can till one person is left hanging. Kat has been evicted. 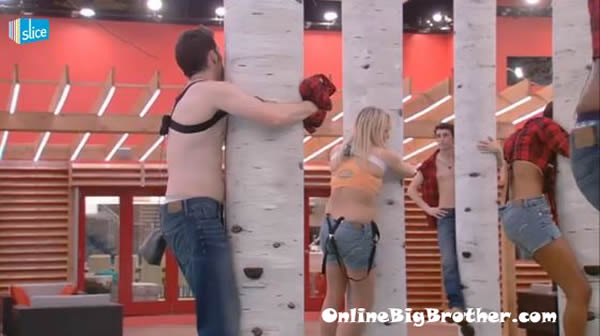 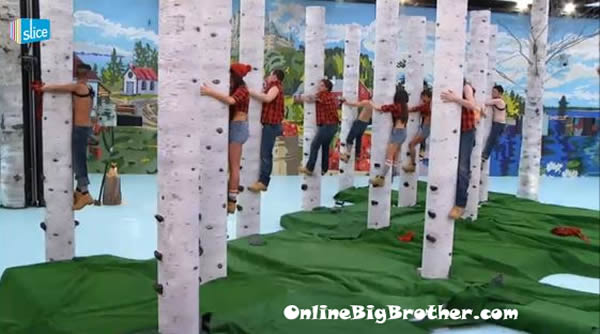 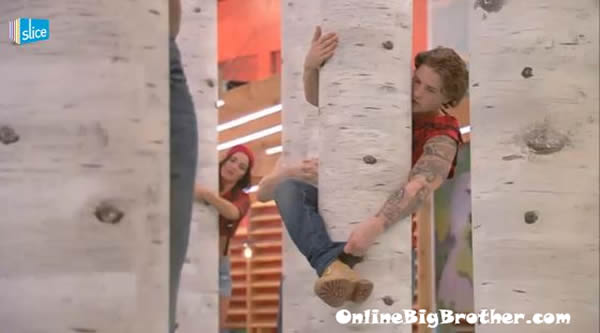 Here is a short clip of the endurance competition:

10:10pm – 10:25pm The live feeds come back up and the house guests are all talking about the endurance competition. Jillian won Head of Household!

Video of the house guests talking about Jillian winning the HOH endurance competition right after it was over.

10:55pm The live feeds are still blocked and will be for a few more minutes until the episode on the east coast finishes airing.

Jillian is going to win the HOH Endurance comp..

Feeds just went down. They were all hurting!!

You called that one Simon. HOH is Jillian

I knew Jillian was one of 4 left in the HOH and since it was endurance I thought she would have a good chance.. Plus there is extreme hate for Jillian amongst some of the other girls it’s going to be war on the feeds.

The feeds are already back down?

Too bad Jillian won. The only two girls that I am so far liking are Talla (I think she’s the chick with the beaver hat) and Topaz. I am betting that the guys get her to put up Suzette and maybe AJ. That’s pretty stupid, because Suzette is not a threat, especially to the guys. She won HOH by fluke. The chances of her winning again on her own merit are slim, and her nominations prove that she isn’t that great at strategy either. The smart thing would have been to put up Jillian and AJ, and if one of them won POV, backdoor Tom. Now the guys are going to make it personal.

I Think you are right the guys are going try and control the HOH.. I wouldn’t be surprised we end up calling this Emmett’s HOH

I do think Jillian will want to put Danielle up..

Yeah, maybe Danielle instead of AJ, but the guys want Suzette, and I think you’re right, she will do what Emmett wants. It’s amazing how many showmances there are just 2 days into the feeds. Haven’t they watched the show before?

I know.. showmances everywhere, kinda silly for your long term game. Alec/Topaz, Emmett/Jillian have really made themselves out to be targets.

11:18pm looks like the feeds are on HUSH HUSH

It was silly for production to show a live shot of the players before the Veto ceremony was shown. on the TV Show. Completely ruined the fact that Kat got put up as a replacement nominee.

AJ is such a tool and he does NOT fit in the house. You seldom see him in the show and the thing is he thinks he’s such a catch and all the women want him when in reality everyone hates the guy. He adds zero value to any conversation and will just agree with everything. It’s really a torturing experience to see him but fortunately we don’t see him much. He’s like Jenn from BB14 (only here as furniture).

Yeah they have some kinks to work out. A lil rusty on the details. The host sucks too. But the cast is good.

showmances already smh whats wrong these people … are they looking for love?