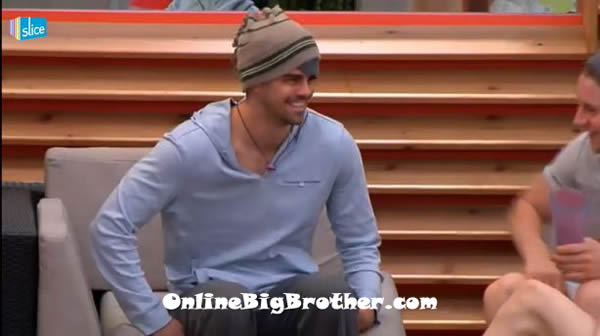 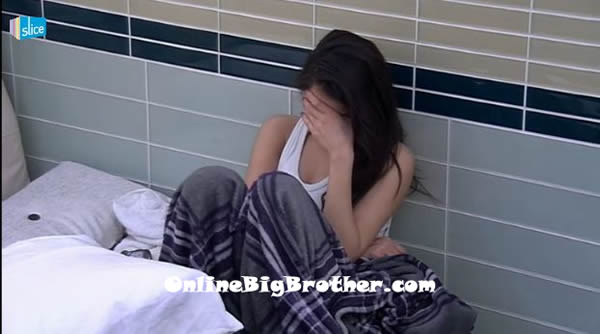 9:10am Big Brother wakes up the house guests, everyone is waking up and getting ready for the day. Topaz is talking to Gary in the havenot room. She tells him that she is going to look like a crazy person for her diary room sessions. Gary is having a hard time waking up and rolls over complaining of a headache. Gary tells Topaz she might have thrown away true love for a locket. Topaz asks big brother if they can throw away all the stuff she said about Alec and Emmett. Can we just start fresh. She says even though he is a little bit douchey. She says I can’t believe I forgot about the whole locket thing. 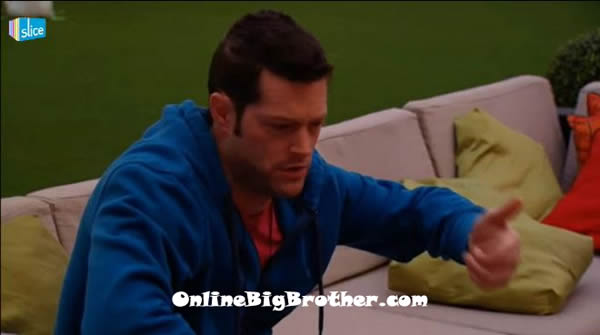 9:30am – 10:15am Out in the backyard: Andrew and Alec talk about how many days are left before the eviction and how they could just lock the HOH room door to avoid Gary coming up. Andrew says why not just go out with some class. Emmett, Andrew and Alec talk about the blow up with Topaz and Talla last night. Alec says that he wasn’t even doing anything with Talla. Andrew calls Alec an adulterer. Alec says that he realized half way through the tirade that it actually looked pretty bad. There were a lot of wh*re and sl*t comments. Jillian and Peter join them outside on the couches. The conversation turns to talking about random things. Talla comes out and Andrew jokes with her saying I can’t believe you had $ex last night with Alec. Talla says that is one thing I said I wouldn’t do coming into this house.

10:25am – 10:45am Andrew says that what he will say in his veto speech that one of the best things about being HOH and having the veto is having the power to make the decision and I have decided to keep the nominations the same.

10:50am – 11:35am Andrew, Emmett and Alec head out to the hot tub. They talk about a lot of random stuff. Big Brother tells the house guests this is their 3 minute warning to head into the house. They are going to be on an indoor lock down. Talla, Jillian, Topaz, Gary and Peter are talking about celebrities and being divas. 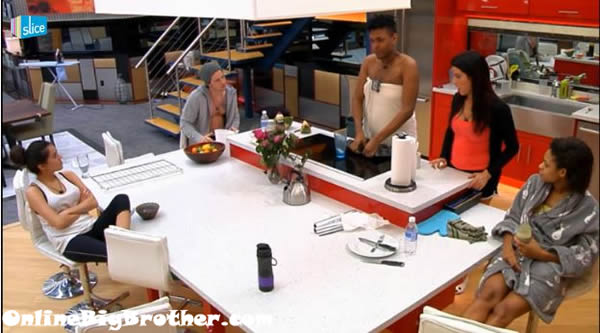 So why does Alec get all upset about his peen being shown on tv, yet he will sleep in bed with a bunch of girls?

Because he’s a douche..

IMO the order of eviction should be: Andrew > Alec> Peter> Emmet> Jillian> Talla and my ideal final 2: Gary and Topaz
but the reality looks more like: Gary> Topaz> Talla> Andrew> Emmet> Jillian and the most likely final 2: Alec n Peter

Gary and Topaz are really alienated themselves. One of them is still going to be here after Thursday (I assume Topaz), and she’s really shooting herself in the foot. Every time everyone’s around hanging out, they’re off alone together.

So is there a good reason why the feeds were down all weekend?

No, cant think of one

Just re-watching the episode from last night & I think the fairest thing would have been to air the Diary Room votes for the house to see. WHY should Topaz be the only one who got sabotaged by Production?

Stir up the WHOLE house if you want fireworks let people see comments by Alec etc.

I couldn’t agree more.
Do you realize how like every other game, Big Brother has RULES?
It’s SO unfair that just for the drama (which they got!) they change the rules.
If they’re going to do twists, they should announce the twist a week in advance, and give details on it. By not giving details, they can do whatever they want with it (like saving the player they want to be saved). This is not fair, and it’s not enjoyable to watch.
I really do think Big Brother owes Topaz because if they didn’t do what they did, Topaz would be in a much better situation.

Here is the thing I think when they sign up to do this they are told anything in the diary room is private (except to us of course) but anything else is fair game and although that was a horrible thing to do to her she knows there are camera’s every where in the house which means you are not entitled to privacy. This is the one thing i do agree with peter with that she should have figured that in the bb house nothing is confedential unless the host tells you it is. If you notice on bbus when julie talks to the hoh in their room the first thing she says is this private no one can hear but arrissa never said that I don’t see why everyone is so upset this is no different then any other twist in the house. Topez should have no better then to talk out loud her game is pretty much done i don’t see who she can swing back but to be honest even if that didn’t happen i think the events would have been the same and everyone already were attached to someone else.

I agree , production owes Topaz big time .
Peter really annoyed me when he called her a moron .. I wish production would play some of Peter’s DR videos for the whole house to see .. And when he got mad about it Topaz would say ” well you should’ve know better than to speak your mind in the privacy of the Diary room , you moron” lol that would satisfy me very much .

Topaz wasn’t IN the diary room…
Hence she is a HUGE MORON!!!!!

Something tells me Andrew isn’t going to just let the Emmett and Jillian duo survive another week.
If he’s smart, he’d start an alliance with Gary, Topaz, and Talla, take Gary off (like he promised) and backdoor Emmett.
There would be 5 people voting.
Evicting Emmett: Gary, Talla
Evicting Topaz: Jillian
Swing votes: Alec, Peter
Perhaps Alec & Peter would realize that they NEED to take Emmett out because he’s playing too good of a game.
If this happens, by a vote of 4-1, Emmett would be evicted, leaving Gary, Topaz, Talla, and Andrew (who has side deals), vs Alec, Peter, and Jillian.
Thoughts?

And that would be his dumbest move first off gary is just as strong as emmitt and he knows he is after him. There is no deal that gary would make with andrew that he would trust he has been after him for a week now and has made it know. Which is why when andrew went on the block he said he knew it was comeing. secondly if he kept gary with emmitt gone jill would be after him as would everyone else except talla and topez. Also emmitt has been close to andrew this tom left where gary and topez have ignored him. Also if he was going to go after emmitt he had to put jill up with him or he would stay.

The boys have been inlined since day 1 and they both know they need emmitt to further them selves in the game to be honest i am not sure where emmitts loyalties lie except with jill but it does seem that the boys are sticking together they have for awhile. I don’t see why keeping gary would be better for andrew but i am pretty sure gary is the one leaving.

I don’t think Andrew would ever get into an alliance with Gary and Topaz but I could be wrong! I have a feeling that an Eastcoasters’ alliance, perhaps w/ Talla stringing along to final 4 would b much stronger than a boys’ alliance. As they pointed out last night, Emmett, Jillian and Andrew are all strong in comps. None of them can truly trust Alec because they know he is more loyal to Peter and he has been inconsistent with the whole cuddlemance(faux-mance?) so Alec may or may not still have a tie to Topaz and Gary. The problem is that Alec can read ppl pretty well and he might catch on before they can back door him or Pete out.

Andrew said within the first 2 weeks of the feeds, “I have one target and one target only right now” I f***king want Gary out of here. HE ABSOLUTELY LOATHES HM.

Didn’t like the twist because I don’t think it is fair that they didn’t get a chance to play for the POV and save themselves. I kind of like AJ and didn’t like seeing him go. Glad Andrew won HOH, like to see Gary gone. Hopefully this happens this week. Go Andrew!!!

So…..Alec has been wearing clothes since the feeds came back….any theories? Everything he does is calculated (my opinion), but I wanted to know what anyone else thought or even noticed?

What is the story about the locket? What locket?

Topaz has a necklace that’s a heart shaped locket… she originally told Jillian a couple weeks ago that it was from the Italian guy she went on two dates with before coming into the house but she is now saying that was a lie to see if she could trust Jillian. She now says that it is a necklace from her sister. Alec is all confused about it now because he doesn’t know what to believe and thinks if it is from a guy outside the house and now he feels lied to.

hahahahahahhaa omg omggg this is hilarious i just watched when Andrew was picking the havenots Gary gets picked and he turnes starts to cry with one finger digging his nose goshhh yuck.the melt down is good am loving this.

Why all the tears from Toronto because Topaz got screwed, at least they left who she wanted on the bloc. Tom had his nominee taken off the bloc only after he used pov on gary. He got screwed by production bigger than toopaz, where was all the tears then. She has no one to blame but herself, its not BB fault her showmance didn’t work out and Jillian and Alec backstabbd her.

Only Topaz was dumb enough to say the names outloud