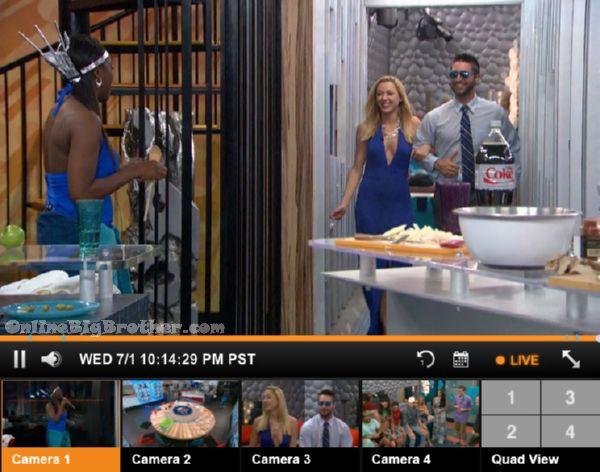 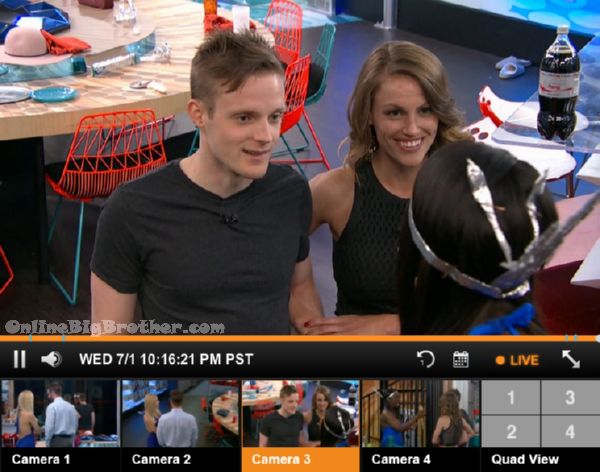 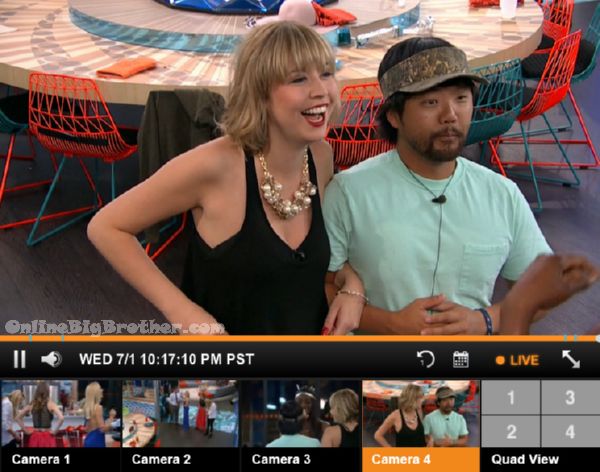 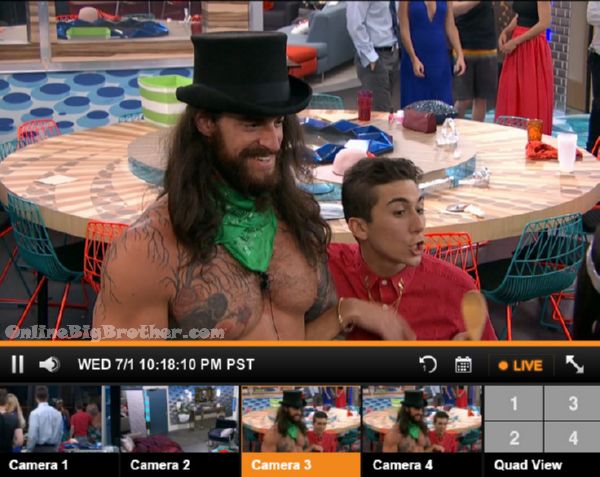 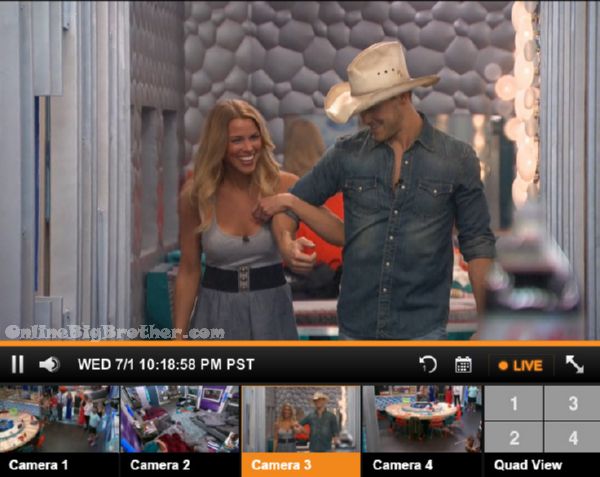 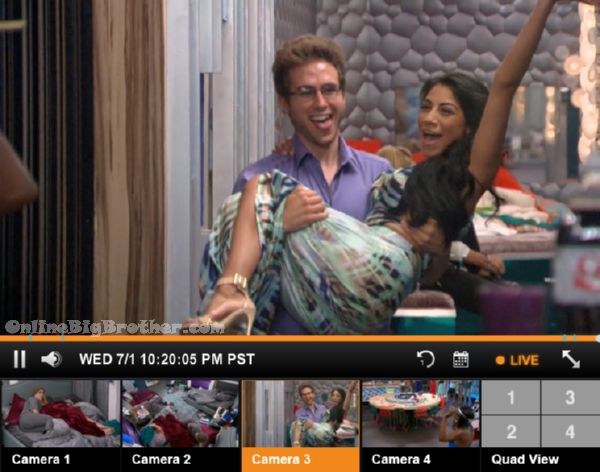 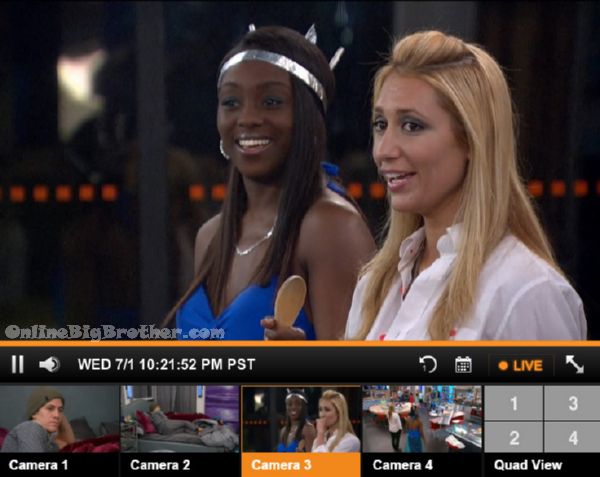 Vanessa and Day
10:22pm Jace and Audrey
JAce is telling her the plan to save him is not going well.

10:28pm They start the talent portion 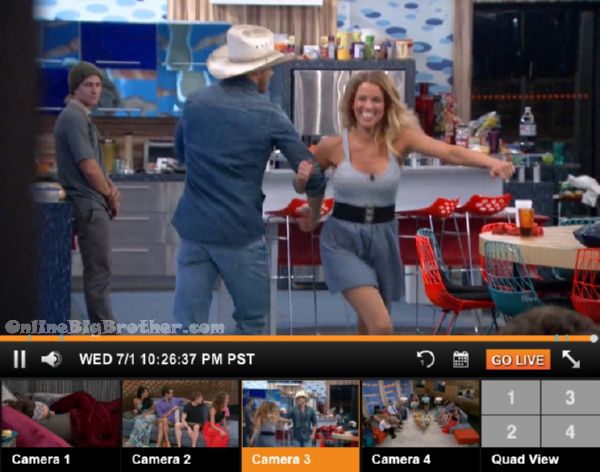 Clay and Shelli do a dance 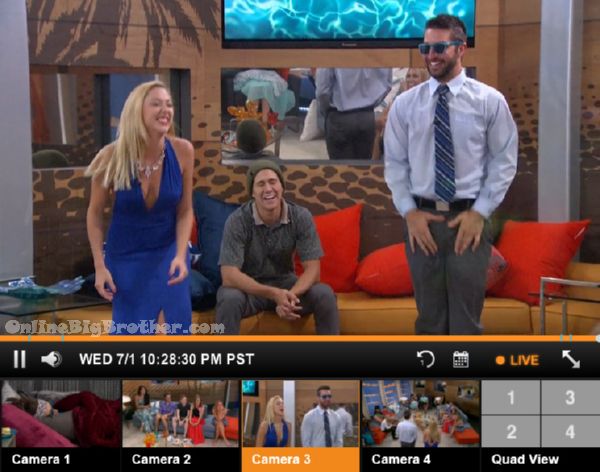 Jeff and Liz do a cheer 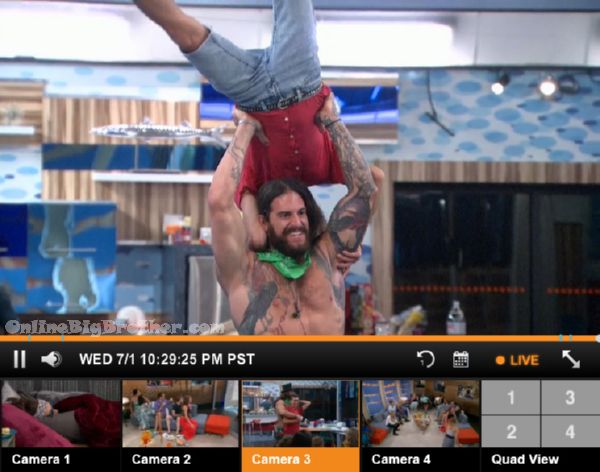 Judas and Jason do some arobats 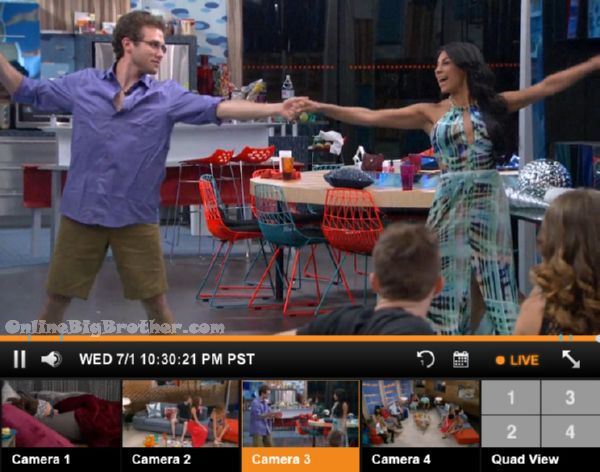 Jackie and Steven do a dance 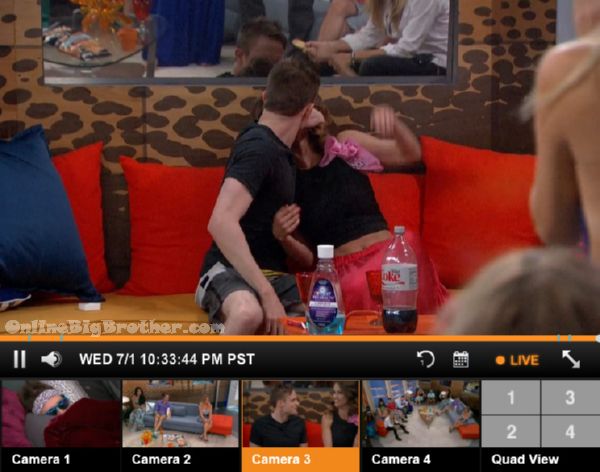 JohnnyMac and Becky demonstrate the slyest ways to let your blind date know they have bad breath. (This one is the best Animated Gif in the Comments) 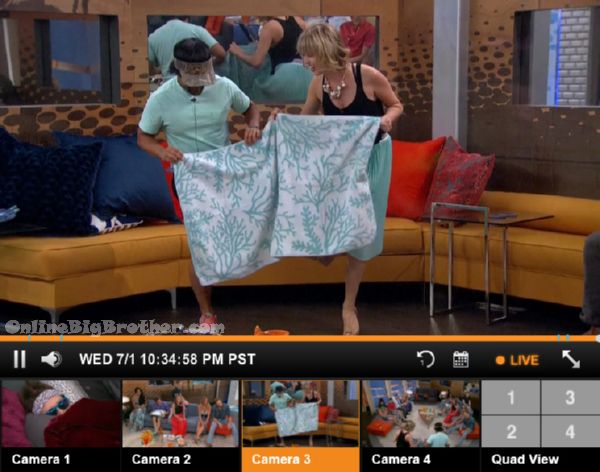 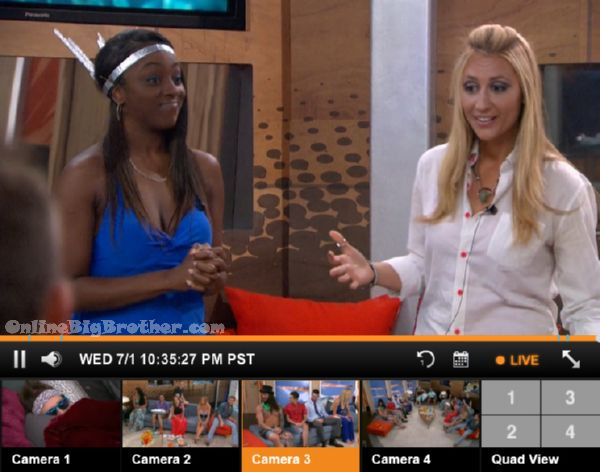 DAY and Vanessa do a interpretative dance “Our Journey here” 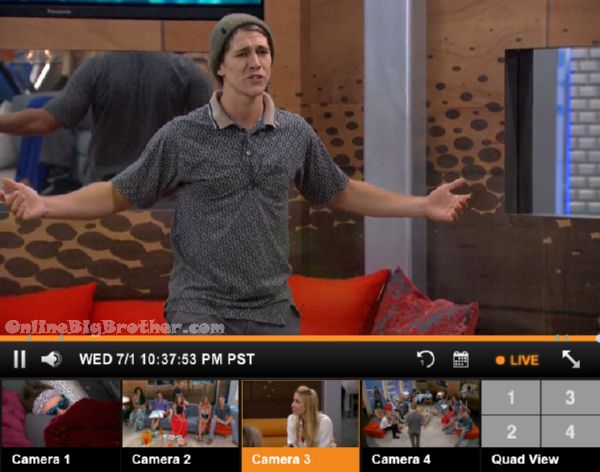 Jace does a rap asking them all for their votes. He says this was going to be his speech for tomorrow but they told him it was too long 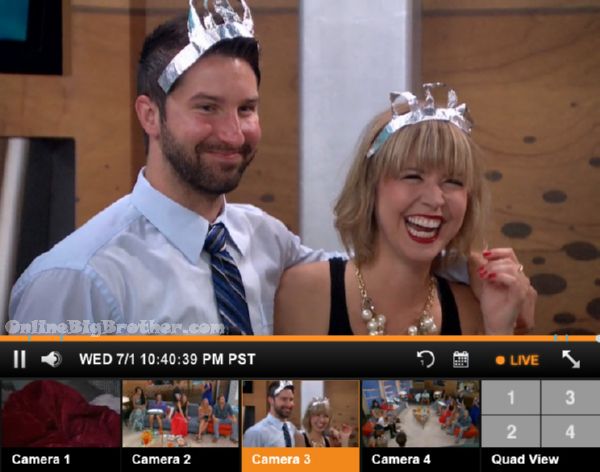 King and queen are Meg and Jeff picked by random

11:00pm Audrey sleeps Jace alone in the HAmmock room. The rest of them are killing time until midnight so the have nots can eat.

11:23pm Jace and Audrey
Still fighting to stay. Sounds like they are going to take one more shot to get Clay and Shelli’s vote. Jace is going to ask for a pity vote from Clay. He’s thinking about telling people that Jackie and Jeff getring a bonus 50K if they win Big Brother 17 together. Audrey isn’t sure people will believe this. Audrey says she will work on Sheli.
11:28pm Jeff and James
James telling Jeff about Jace’s and Audrey’s stories today to flip the house and get JAckie out.
Jeff calls that an Audrey move calls Jace a scumbag and a douchebag.
Jeff doesn’t want to work with Shelli but thinks liz is ready to join. They have to make sure she’s still not feeding Austin information.
11:33pm Jeff and Jace (Getting heated)
Jeff is denying telling Jace about the song tells him he’s out the door, he looks like a d1ck
Jeff – Bro Deep down you’re a piece of sh1t .. Continue you’re bullying
Jace – You’re not much better how am I bullying
Jeff says he pulls people in rooms and aggressively campaigns
Jeff – dude dude dude dude BRAH dude dude dude
11:37pm Audrey and JAce
Jace says james leaked to Jeff the plan “She’s a piece of sh1t”
Audrey says Day would make fun of him the entire week “She’s the worst”
Audrey is asking him for help with Clay and Sheli, “I want to you say JAmes offered you a plea bargain to say I offered .. no.. ”
Jace – Just think about it i’ll come back
Jace isn’t going to do it Clay/Shelli tonight, “I will help you tomorrow”
11:50pm Jeff goes to everyone and retells the conversation he had with JAce where he called him a piece of sh1t. Jeff’s retell is substantially longer. 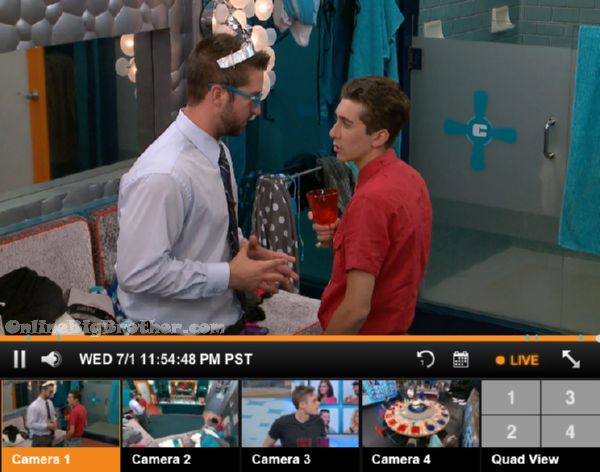 11:54pm Bathroom Jason and Jeff
Jason asks who is in the hammock room
Jeff – “Probably Jace crying.. that little b1tch”
Jeff says he’s going to step away from Clay
Jeff wants Audrey out next week, He’s talked to James already. He wants a final four with Jason, Meg, James and DAY.

Midnight THe houseguests get Chinese food
Sheli brings Audrey a plate. Steve also pays her a visit to ask her if she needs anything.
Have nots are overjoyed to be able to eat.

Live Feed subscription gives you CBS All Access thousands of archived shows. Live Shows like Big Brother, all the Big Brother Seasons, and 24/7 coverage of what is happening inside the Big Brother House. Plus there’s flashback that lets you go back to any second of the feeds and rewatch what happened. Simon and Dawg will index the season just watch the parts worth watching.
All this for $5.99 a month try it out 1 week free. Support our efforts and get your feeds via a link on this site. Live feed subscription Sign up

James is a bit disappointing here. So naive, gullible and easy… Thank God Da’Vonne was there to talk some sense into that man!

I love this season so far, but I’m afraid bad choices will throw the gameplay through the window… I mean: I don’t want the sh!tstirrers out. Audrey and her 23 personalities need to stay, and I’d love to see a game more free of alliances for a change. You see: there are alliances in the house, but they are so fickle that in the end I’d not mind if people fought over stuff that doesn’t involve the people who are actually up for eviction. If you take a closer look, the fack Jace or Jackie is leaving is a background story, because the whole house fights with Audrey and makes up with here and then they turn on each other with suspicions non-stop! I’m loving this mess…

Oh they are certainly a weird group, but I think they’re interesting. Def not as much chemistry as the bb16 cast had. A lot more hight strung as well, should be fun to watch. They’ve been together two weeks and they’re already at each other’s throats

The Hammer
Reply to  Beentheredonethat

I like this season. No re-treads from past years, no scumbags like Derek and Frankie, and that goofy dentist guy makes me laugh every time he’s onscreen. I’m more optimistic about this season than any since The Brigade year cause it has SUCKED ever since then, last year was the worst ever!!

Roxt
Reply to  The Hammer

Thank you SO MUCH for calling Derek a scumbag! I have rarely read something truer about him! That whole “you’re taking food out of my daughter’s mouth” speech (ugh!) and his sick comments about Victoria are still very fresh in my mind. I’d never wish on his daughter the things he did towards Victoria… but life is a funny thing: he was given a daughter and let’s see how he deals with this situation given that he’s such a chauvinist.

I have already heard some sexist comments coming from Jeff… I really wish CBS kept it more real, and showed all their nastiness during the episodes just like they were forced to do on BB 15.

Can’t stand Jeff… he gives me bad vibes… I see a bit of MovingCompany guys in him + a bit of Cody + a lot of BS coming from an ego of a hasbeen high school jock (the worst kind of hasbeens!).

Day is smart and not easily fooled. I like it. She has serious potential.

Noooo Day Steve wanted to work with you… I’m sad that Day, Jason, and James aren’t solidifying a final 3. Day hasn’t even solidified a final 2 with Jason. I hope she is just bidding her time.

Jeff’s flirting on after dark is unbearable

Anything related to Jeff is embarrassing…

The prom is a welcome distraction from the constant scheming (well Audrey/Jace and Austin/Jeff are still working).

Austin/Jason was funny, though I though Jason was about to fly over Austin’s head lol!
“Stefan” looks adorable.
Day/Vanessa were super cute together.
JohnnyMac and Becky were freaking hilarious. “Have you ever counted shoulders before?” XD

I love the first week of BB before the first eviction. It’s a time for everyone to get to know each other. My favorite night was in season 12 when they played “big booty”!! Brendan was so uncoordinated at the game, and even though he was the #1 target of the other HG’s, everyone put game aside and had a great time that night. (And this was days before him and Rachel got together). Typically this is when everyone creates bonds of friendship that determine who they will align with in the coming weeks.

Apparently, Audrey didn’t watch the live feeds in past seasons, because she played the gossip and intimidation games before she had real true partners to count on. So tonight, instead of participating in a fun bonding experience she continued her tactic of isolation and martyrdom by sitting in bed all day.

But she is not done yet, because she is still scheming tonight trying to create wedges between people. And it’ll work in the short term, but it’s not going to last long if her only true ally in the game is the BB Takeover twist.

This prom/talent show is sooo cute and looks like a lot of fun!
It’s nice to see everyone (save Jace) drop the game for a minute and just lighten up and be themselves.
I don’t recall seeing Audrey though…

she is too busy having a pity party for herself, she burned too hot too fast. But she will get through it, a new threat will appear and besides the producers will convince the other players to play nice with her..she is their (producers) cash cow so she has to stay.

I’m sooooo glad you mentioned the producers’ roles in who gets to stay. Last year it was so contrived to have the uber-gay Frankie on the show during the time her album was to be released. BB knew casting him would bring in all the Ariana (hate that bitch, btw…and her bro) fans. Frankie could have been evicted multiple times last season but (clearly) the producers talked those who wanted him out, to let him live another day. I swear, IF Frankie shows up on this season for a cameo or more, I will cease and desist in watching BB. Just my shiny two cents.

Again this is why I’m rooting for Day she saw through the Sith Lord with crazy eyes plan , I mean come on why save someone who will most likely come after you once they are in a position of power. I wouldn’t be surprised if Audrey targeted day again after ruining her plan

sighn thwem up to colgate!

The only way I would be happy if Audrey wasn’t evicted or won HOH for next week is if she used it to BD Jeff. He’s unbearable. I’m not even a huge Liz fan, but feel bad she (and Julia) has to pretend to be interested in Jeff when she was clearly more interested in Jace (and he wanted to kiss Liz). The last thing I would want to see is a Jeff/Jackie/Austin/Liz/Shelli/Clay alliance form and make it to the end.

Audrey avoiding the prom was awkward. At least Jace made an appearance, and was nice for a change rather than an arrogant bully. Maybe what Vanessa said is starting to sink in. I do admire that he’s trying everything he can to stay right up until the eviction. That’s all you can do in that situation.

A couple of other people have commented on this, but I am also curious why James/Jason/Da’Vonne haven’t solidified a final 3. I suspect Jason/Da’Vonne are trying to wait a few weeks to make official alliances/deals though. They should keep James close. He’s loyal to the people he trust, and is gullible and naïve enough to fall for almost anything.

Liz made me nervous in that dress at “prom.” So thankful for her sake there wasn’t a “wardrobe malfunction.”

Jeff is worse than Jace. I can’t wait until he gets evicted.

Jeff’s the douchebag of the season.

once Jackie watches this first week of BB, I bet she will be glad she and Jeff are only friends. He creeps me out and it would be hard for me to interact with him if I was in the house with him.

Who thinks Becky and Johnny Mac are a cuter couple than Shelli and Clay???

Ok I now want to beat them all to death with a hammer EXCEPT Vanessa, Steve and Johnny. Must be good cast cuz most seasons I only have one person at most I don’t want to beat to death.