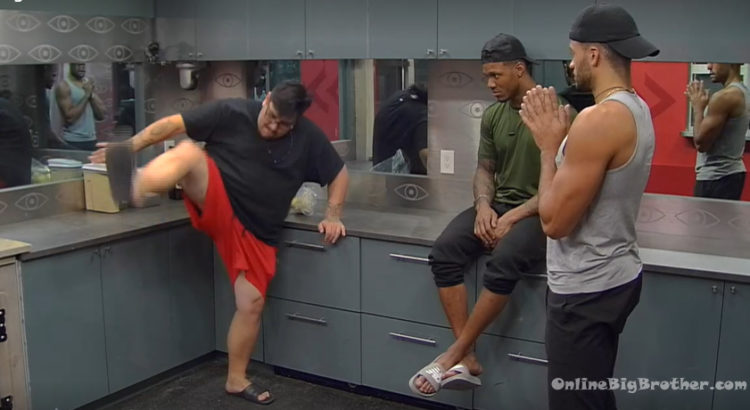 12am Storage room. Ty, Keifer and Jed. Big Brother showed them more memorization videos for a comp.
They comment on how Breydon is good at everything. Keifer – if its for the POV, it doesn’t really matter. Jed – I could see them doing this a week in advance for the HOH. Keifer and Ty – no way. Keifer – no way! Not a week in advance. Jed – so this has to be for the veto. Ty – will it be just straight memory or will it help you to have known those thing better? Jed – I’ve never seen vetos as just straight memory. Keifer – I never see vetos that are memory. Jed – I’ve never seen a veto that is just straight question and answer. Ty – what I hate about those is that I don’t know what details to look at. Keifer – there were only so many to look at. Jed – how many pans were there? Ty – four. Keifer – four. Jed – Breydon said five. Ty – why would he say there were five? Keifer – meh .. all I have to do is be better than Tera and Tina. Ty agrees. Jed – this will be for tomorrow. Keifer – I got it! I got it all! 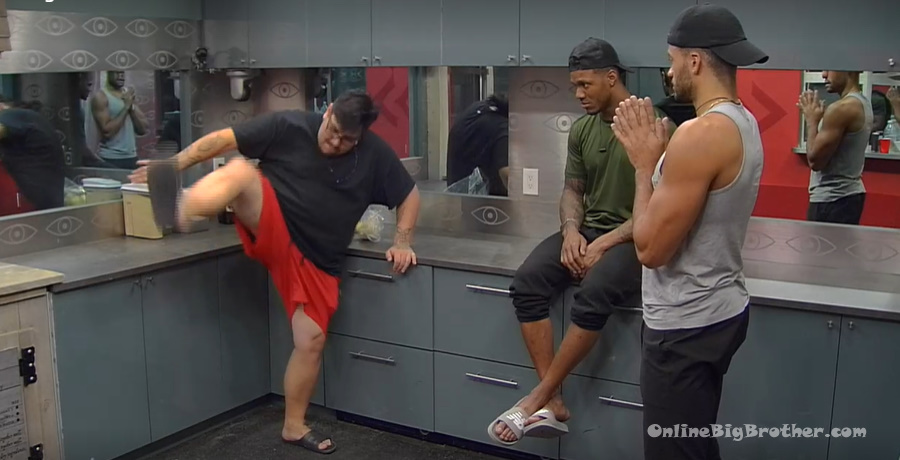 HOH room. Jed and Beth are studying what they remember from the videos. Beth then showers and leaves. Breydon joins to talk to Jed. Breydon – its weird that they would show it (videos) before even the noms. Jed – true, I didn’t even think of that. You don’t even know if you’re on the block but at this point pretty much everyone is playing in the veto. I couldn’t see it just being for fun.. honestly. Breydon – is anything for fun in this place?! Jed – right. Breydon – did you talk to Tina and Tera? Jed – yeah, I just told them they’re going up. Breydon – oh! Shut the f**k up! Jed – yeah! Breydon – what did Tera say? Jed – she was just pretty much pitching for you to go up. Breydon – of course. Jed – and I was just like .. NA! I was just like if you win the veto you will be in a position to take Tera down. And I don’t want to risk that you wouldn’t to risk you winning a veto and feeling like you need to take her down. Even though you say you wont.. Breydon – yeah of course but its the same thing with Keifer. Beth joins them. 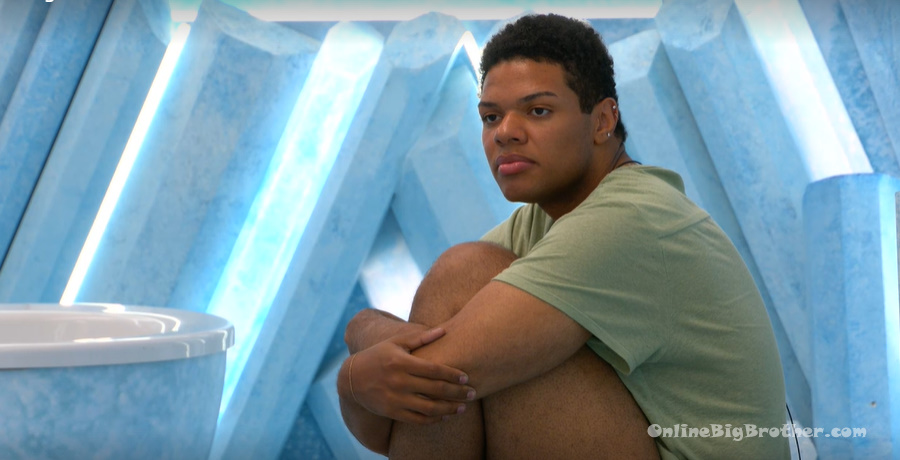 Groan…what has happened to this season? Smell my Kiefer? ugh….The Alphas….ugh…TNT the bickering banjo duo….ugh…is there any hope or has production sucked the life out of this project? SMH….

I’d say it was Vic. She sent home Latoya, won the first comp sending home Julie (not a fan but would have been a fun train wreck) send home Austin crippling the other side making this game one sided. Those three moves really set the mood for the season. Kiefer was responsible for taking out Kyle and Roh for personal reasons, and again crippling the other side of the house. I can’t believe I’ll say this but I loved season 2 was for the twist to break up the first 5 or else that season would have ended up like this season….ugh twists or production meddling which one is worst…..

lol what?
Reply to  Guy From Canada

the stupid twist that broke the first 5 allowed the other side of the house steamroll the rest of the game. One of the worst twists in BB history

Feeds Gold
Reply to  lol what?

neda/jon and co did so well and made such a good comeback because they did well in comps, that one canadas twist only impacted one hoh week…from that point on the first 5 sucked in comps…also arlie switched sides

we got a rare underdogs coming back to win season

Jed has a problem that Brey is always hanging out with them.
That’s what happens when you tell someone you are in a final 4 with them.
The final 4 was Jed and Beth’s idea.
They talked about how Breydon was always attached to Austin weeks ago.
Did they think he was going to sit alone? Or attach to someone else? Or sit alone until called, do their homework and chores for them, then go sit back in his corner?
They created this situation, and they’re surprised the situation exists.
Typical.

Sort of knew that Breydon would end up Jed’s next target.
Beth hasn’t been steeering him, so Kief’s influence comments took root.
In fact, Beth has been pulling back from her Kief talk since her pantry rant. She mentioned it to Ty, but more as a top 5 not top 4 option.

At present, Beth has told Tera she will throw veto to her.
Ty has had a campaign / safety conversation with Tera.

I still say this is a prodomove more than a Trio move.
One reason only: it’s good for Kiefer. It removes the final 4 obstacle.
It puts Kiefer into a safety postion with every member of the house.
Since WHEN in this game does Beth want to keep Tera? Ever.
She hasn’t. She had to be convinced not to target Tera last week. Remember her first HOH mirror talk last week: My target is Tera talk. She’s talking to herself NOW about how she’s running this HOH (without any of her usual influence talks to Jed) and she must keep Tera (who she dislikes and doesn’t trust, and has said over 20 times she wants evicted).
The concern about two votes and a pair has been replaced as well. This is entirely suspect.

Kiefer says they’ve never had a memory POV. There were 2 in season 6. remember the orders in order for the skip the dishes pov and the video clips veto where they had to figure out when the images happened in order in the season. in season five there was the fashion show recreation memory veto. It’s not unheard of to have a memory veto.
It’s rare. Not unheard of.
Kiefer thinks the videos are for a special competition.

In other big brother news: it is being reported that Nikki Grahame has died.