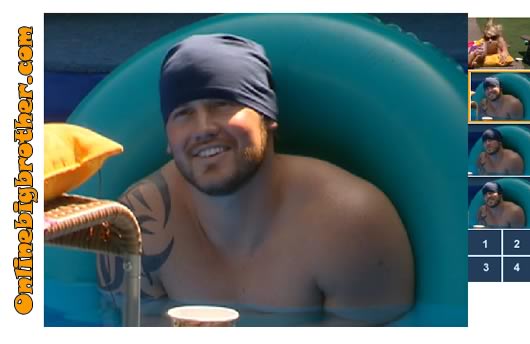 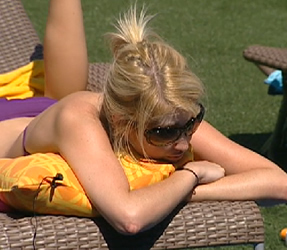 3:10pm Pool Brit, Monet and Lane The girls are teasing around with Lane trying to “get his vote” Monet says that Lane reminds her of her dad. because he’s always teasing the girls and trying to be mean when he really isn’t. Monet mentions that her dad likes to argue just like Lane.. Lane laughs says his mom loves to argue. Monet leaves… Brit and Lane left in the pool.. chattign about other rreality shows. Brit says that Big Brother has the biggest ranch of gfans from teens to bb10 Jerrys. She tells him that 10 million people watch the show whereas american idol gets 30million. Lane “wow thats more people than texas and fort worth” Lane wonders what it’ll be like when they get out if they will have stalkers.
brit: “you treat me like my older brother treats me”…”I think Nick would like you I don’t think he would like all the sexual innuendos but I think he likes that theres someones here teasing me and keeping me laughing”

3:30pm Have nots Monet and Hayden
Monet: ” i just want to tell your that i’m not going to throw matt under the bus i love him i just want you to know that voting me out is giving them (rachel and Brendon), what they want and we have to stop them.. Why do they think i’m such a big threat?”.. “they are on a massive power trip they think they run this house”

Hayden: “I think they want you out because Rachel doesn’t like you, it’s personal to her regardless of what “they” are saying”.
hayden “I like Matt and you a lot this is a tough one”..”we still have a couple days a lot can change i even heard that rachel and brendon are talking about backdooring Matt”
Monet: “Theres not point to talk to ragan because him and matt are so close
Hayden Agrees with her he tells her that he is going to vote the way he wants to not the way the house is going to vote. Monet tells him that if she can get the majority of votes then it doesn’t matter what the hell rachel wants, “she’s not the house”. Hayden agrees brendon and rachel are not the house they are 2 peple, “fuck them there’s a chance you might still stay around anything can happen”..”i’m going to be me and thats how i’m going to play
the entire game and if i lose i lose”. Monet asks him If he is serisouly thinking about voting for her than if she can have him talk to enzo and lane then she’s sure she has their vote. hayden says he’s going to figure out what he’s doing and he’s going to talk to everyone and he will tell her once he’s made up his mind.

3:45pm Bathroom Kristen and hayden Hayden is starting to tell Kristen about his conversation with Monet when rachel walks in.

Rachel “they say they think they have kristens vote to stay”
Hayden “Who said that?”
Rachel “Brit has been saying that”
Kristen “thats a joke ”
Rachel “there just doing that because they think they can get a vote”
rachel “how are you guys feeling?”
Kristen “i’m getting my period and i feel like crap “… they move to period talk and i flip the feeds.. 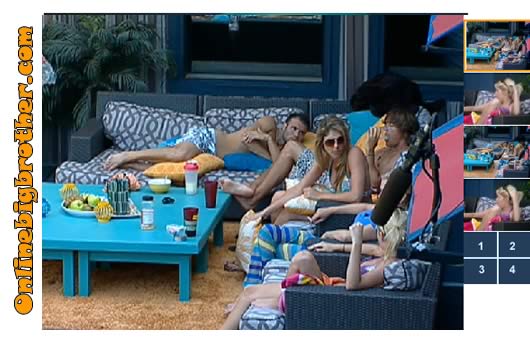 3:55pm bacjyard Couch Enzo, Brit, hayden, Kristen. Kristen confronts brit that Rachel is saying that brt told everyone that Monet has Kristen’s vote.. they go back and forth about how crazy and idea that is.. You can see kathy roll her eyes.. Hayden just munches on some ice.. Enzo says he’s getting so fucking bored he wants to fucking scream and go off on someone. (one interesting thing to note that while kristen was talking to Brit enzo was watching hayden to see what his reaction is.. look at the above picture and you can see a bit of it)

4:03pm matt joins them and they ask him were he sleeps…. 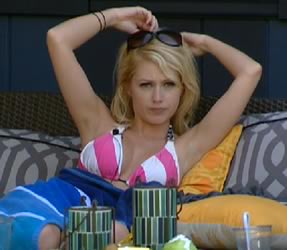 4:08pm Storage room hayden and Matt
Matt is telling him that Kristen’s vote is critical. Hayden explains everything that just happened with someone telling Rachel that Kristen will vote to keep Monet. Hayden says that Kristen flat out just said that she’s voting to evict Monet. Matt i think it’ll be 5-4 Kristen is the swing hayden thinks is he’s crazy … Matt lays out the votes. Hayden “it’s getting close” hayden: “you have nothing to worry about as far as kristen goes” Matt “good i have nothing to worry about from ragan ” 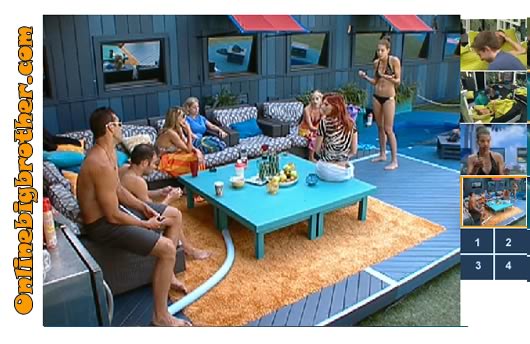 4:13pm rachel and kristen confronts brit and monet rachel justifies her reason to put monet up and says it’s only week 2 and she thinks it not too much to ask to have the house vote her way. Kristen chimes in and says that Matt doesn’t deserve to go home. Brit tells them that she hasn’t been campaigning for Monet and she never said that Kristen is voting to keep Monet… Rachel is getting pissed at monet she tells her to go get her facts straight.. Brit starts to cry.. kathy jumps in and says why are you accusing me of saying that Brit says “Look Kathy i’m not accusing you I was asking you” Kathy “oh” brit pleads with them to tell her who said that she was saying that Kristen was voting to keep monet because she wants to clear her name.


Onlinebigbrother.com is around because of your donation every year the site costs us to host the images and run the 3 servers needed to handle the traffic. If you like the site then please consider donating to keep the madness going. Thanks!

Has anyone thought that perhaps Matt & Monet are the friends that the saboteur alluded to? They’re both from IL & Matt’s a web designer with Monet a beauty pageant winner – perhaps they’ve known each other a while?

could be but I doubt anyone knows each other

I’ve been thinking that Kathy and Brit are Mom and daughter also since the first week because they do have a resemblance.

Kathy and Britney are not mother and daughter. I know this for sure.

Did you notice that both Kathy and Brittney are from Arkansas?

Annie said last week after she was evicted that there wasn’t a pair of friends. There never has been a pair, it was just a saboteur lie.

If Matt was long time friends with Monet
he would not have volunteered to go on the
block next to her. Making one of them go home. idiots

They are both from Illinois but nowhere near each other. In fact Milwaukee, Wisconsin and Indianopolis, Indiana are closer to Matt than Monet and Monet is closer to St. Louis than she is to Matt.
I thought Matt and Annie may have been the longtime friends as Annie was originally from Chicago and Matt is from Elgin which isn’t too terribly far from Chicago and is considered a suburb.
Illinois is a large state so just because Matt and Monet are from here means very little.

I hope brit wins hoh that kristen look like a strong face chimp!

I cannot believe that Brendon just said that he can’t stand people who cry. OMG! He is the biggest cry baby ever!

Brendon’s a douche, i’m sorry to the Brendon fans out there. I watch these feeds at least 12 hours a day and he’s a douche

I have had a hard time liking him from the get go. My friend loves him but I just can’t. Something about him just doesn’t add up.

He’s amazing. He’s incredible. He so smart and not just in this house. Outside too!!

Moaner how do u know what he is like outside. My Fav Rachel and Ragan

I agree with you guys. Brendon and Britney are basically the same person, except Brit is funny and she has bigger balls.

I can’t wait until Brendon goes home. He disgusts me with his manipulations and smoochie noises.

Are u watching the same show as me they are all manipulating each other the way the game is going to go if u want to win.

Oh, bring back Michelle and her night terrors, maybe Kathy could have a friend then instead of dumping on Andrew

Uncle Cool
Reply to  A. Stounding

LOL I saw that on some tabloid show.

No more Lydia. She is done.

Michelle was smokin’ hot. I’d love to see her back on the show.

It’s only week two and she thinks it’s not too much to ask that everyone vote HER way?

I hope this same speech is made next week by Britney when Roach and swimmer boy are on the block with Enzo not using his POV.

The two people who know each other of Hayden and Kristen. From what I understand they have been friends for years.

P.S….Rachel is such a disgusting excuse for a woman…..put some damn underwear on!!! Gross.

For the last time………..NOBODY KNEW EACH OTHER BEFORE BB12!
Fit over, sorry guys!

JJ – you said from what you understand, is that you with insider knowledge or just something off the top of your head?

Woahh
the girls are putting each other down!!
this season is going to finish in a sausage fest by week 5

Even I don’t want that

who does Brit think she is calling Kathy mean what have her and monet been saying about everyone inside the house goodbye monet stop your crying already.

I still think Hayden & Kristen are twins, & there pulling are leg. Or Brandon & Big Red Bottle are husband & wife, & I have said that the first week, then again I still might eat that crow sandwich. Yum-o By next Sunday it will start getting good, hang in there my friends.

oh judy, if Hayden and Kristin are twins then I will allow you to gauge out my eyes with a plastic spoon. That is too backwoods even for BB. I thought last year it was shameful to bring someone challenged on BB but this would be going a little too far.

Oh, that is so true! Old Ozark stories! Not brother and sister kissing and all. Nope, hope not! Cousins? NO! Please NO!

I’m all for reading about it in a V.C Andrews book but actually thinking about it makes me want to spew my Tim Hortans I just had and I had sprinkles.

Who was “challenged” last year?

She is probably referring to Jordan on her cynical ways, she thinks she is so clever to throw something like this out there, like she is dropping a napkin. Envy is sad !